“You are what you eat.”  What we eat shapes the physical and moral landscapes of our lives, from the health of our bodies to the health of our communities. What is the path from seed to restaurant? How do labor and land policies determine which seeds are grown where, and by whom? Who benefits from our current system? Who is harmed? Come and learn about how Macalester students are invested in this innovative Farm to Restaurant project in Minneapolis.  Julia Frost Nerbonne and Ruhel Islam will explore the foundations of the current food movement in the United States.  Using the example of the HECUA – Gandhi Mahal Farm Project, they will compare and contrast the meaning of the terms food justice and food sovereignty, and talk about how they are part of building a local food economy right here in Minnesota. Project-sourced treats will be provided by Gandhi Mahal.

The U.S. has a goal to produce 8 billion gallons of biofuel from native prairie grasses by 2022.  Switchgrass, a native prairie grass, has been identified as a lead candidate for bioenergy production because of its high biomass yields and tolerance to being grown on marginal land.  Many researchers have suggested that focusing on growing switchgrass on marginal land will reduce the competition between biofuel and food production; while also benefiting the environment by reducing erosion, improving water quality and increasing biodiversity.  In order to be adopted by farmers and enter the landscape through market forces, switchgrass will need to be more profitable than existing commodity crops.  Ideally, market forces would place switchgrass on the desired marginal land at a reasonable price, however this is far from certain.  In this research, we developed high-resolution (30m) maps showing where switchgrass profitability exceeds that of the eight highest producing commodity crops across the Midwestern U.S.  We created the maps by modeling crop yields multivariate linear regression methods and used varying crop prices to determine where and under what circumstances switchgrass will enter the landscape.

Bon Appétit Management Company is an on-site restaurant company that operates cafes at universities and colleges, corporations, and specialty venues.  Since it was founded in 1987, Bon Appétit has expanded to serve 500 cafes in 32 states.  This equates to serving approximately 135 million meals per year.  As a large company dedicated to Food Service for a Sustainable Future, how can it use its influence to push the entire food system towards sustainability?  Midwest Fellow Alyse Festenstein will discuss three of Bon Appétit’s company-wide sustainability initiatives—Farm to Fork, Farm Animal Welfare, and Low Carbon Diet—and highlight the impacts of these programs on the greater food system.

Alyse Festenstein is the Midwest Fellow at Bon Appétit Management Company Foundation. In this position, she visits college campuses throughout the Midwest and engages students in dialogue around pressing food issues and Bon Appétit’s company-wide sustainability initiatives to address them. Alyse is a recent graduate of Washington University in St. Louis (WU) where she majored in anthropology and economics. During her four years at WU, she became immersed in sustainable food production through her leadership in the campus student-run farm.

Many local jurisdictions, state agencies and tribes collect biological monitoring data to measure the health of streams throughout the Puget Sound region. Jo’s presentation will focus on what biomonitoring is; the work she is doing to increase regional coordination, standardize methods, and improve data management and analysis tools; and how this biomonitoring information is being used by State and regional decision makers to identify impaired areas, set targets for ecosystem recovery, prioritize restoration efforts, and assess project effectiveness. Jo will also touch on how her Macalester education led to a career in applied science with stops along the way in the islands of Palau, the murky waters of the Mississippi River, and the jungles of Papua New Guinea amongst other places.

Jo Opdyke Wilhelm graduated from Macalester College where she majored in Biology, minored in Japan Studies, and played varsity basketball and soccer. She received her M.S. at the University of Michigan in Resource Ecology and Management with an emphasis on aquatic ecosystems. She is also currently on the Macalester Board of Trustees. 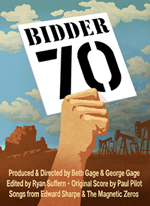 In 2008, as George W. Bush tried to gift the energy and mining industries thousands of acres of pristine Utah wilderness via a widely disputed federal auction, college student Tim DeChristopher monkey-wrenched the process.  Bidding $1.7 million, he won 22,000 acres with no intention to drill.  For this astonishing (and successful) act of civil disobedience, he was sentenced to two years in federal prison.  Bidder 70 tells the story of this peaceful warrior whose willingness to sacrifice has ignited the climate justice movement.

The 2007 Fourth Assessment Report published by the Intergovernmental Panel on Climate Change estimates that 145 million people will be permanently displaced from their homes in the next 90 years due to man-made climate change.  This number is more than three times the number of people displaced today by wars, famine and natural disasters and yet little is being done within the humanitarian aid regime to create strategies for feeding and sheltering this destabilizing human tidal wave.  This talk will explore the history, present conditions and future of refugees and their shelters.

Matthew Jelacic is an Assistant Professor of Environmental Design and an Adjunct Faculty member of the Mortenson Center in Engineering for Developing Communities at the University of Colorado. His research includes improving the design of shelter and planning for displacement caused by natural disasters, climate change and other conflicts. Prof. Jelacic received his architecture degrees at Pratt Institute, where he received the AIA Henry Adams Medal, and Harvard Universityʼs Graduate School of Design, was a Harvard Loeb Fellow in 2003-4, studied international human rights law at Oxford University in 2008 and was a Rockefeller Foundation Bellagio Center Scholar in Residence in 2009. From 1991-2001 he worked in the atelier of Louise Bourgeois and in 2004 he became a licensed contractor.

Between 1950 and 1970, the United States placed great emphasis on civil defense as a key tool for winning the Cold War. The construction of community fallout shelters and the promotion of home bomb shelters acted as vital components of that policy. The Federal Civil Defense Administration (now the Department of Homeland Security) encouraged families to stock two weeks of food and water in case of an atomic attack.  But what happened when those food supplies ran out?

In this talk Ryan will shift the spotlight away from suburbia and towards rural America. The United States Department of Agriculture played a critical role in educating farmers and food processors about production in the event of a nuclear attack. In a series of brochures and films disseminated to rural communities, the agency cooked up market solutions for post-attack food systems by placing emphasis on the importance of farming to the survival of the United States in the wake of an imagined World War III.

Brenda Hillman will discuss the influences of several “Nature” traditions– including ideas of Romantic poets– on current ecopoetry, ecopoetics, and environmental activism.  She will present some poems that have inspired her in these traditions.

Brenda is the author of nine collections of poetry, all published by Wesleyan University Press, the most recent of which are Pieces of Air in the Epic (2005), which received the William Carlos Williams Prize for Poetry, Practical Water (2009) and Seasonal Works with Letters on Fire (2013).  With Patricia Dienstfrey, she edited The Grand Permission: New Writings on Poetics and Motherhood (Wesleyan, 2003).  Brenda is a social justice and environmental activist and lives in the San Francisco Bay Area.

“Braiding Sweetgrass:  Indigenous Wisdom, Scientific Knowledge and the Teachings of Plants”
Speaker:  Robin Wall Kimmerer, SUNY Distinguished Teaching Professor of Environmental Biology, and founder and director of the Center for Native Peoples and the Environment

In essays that range from a retelling of the creation of Turtle Island, through the author’s childhood, to her struggles as a female, indigenous PhD candidate, to her evolution as a mother, and to her current fight for the rights of all beings living around her upstate New York home, the book returns continually to plants, animals, and indigenous stories for guidance. In an essay about boiling down maple sap for her daughters, she describes how squirrels showed us the path to maple syrup. While recounting the history of Native displacement, she illuminates how trees speak to one another in languages that drift on the wind. And in the story of her beginnings as a scientist we learn how flowers can work together to create beauty and sustenance that appeals to humans and bees alike. As she explores these themes she circles toward a central argument: that the awakening of a wider ecological consciousness requires the acknowledgement of our reciprocal relationship with the world. That once we begin to listen for the languages of other beings, we can begin to understand the innumerable life-giving gifts the world provides us and learn to offer our thanks and care in return.

Robin Wall Kimmerer is a mother, a scientist, a decorated professor, and an enrolled member of the Citizen Potowatomi Nation. Her first book, Gathering Moss was awarded the 2005 John Burroughs Medal for outstanding nature writing. Her writings have appeared in Orion, Whole Terrain, and Stone Canoe amongst many others.

“Health Implications of Climate Change in Minnesota”
Speaker:  Kelly Muellman, Planner for the Minnesota Climate and Health Program at the Minnesota Department of Health

The last few decades of climate observations are concerning; the rate of change is unprecedented in recent history and changes are already having consequences on the health of the public. This presentation will provide an overview of observed climate changes in Minnesota, the potential impacts on public health, and the populations most vulnerable to climate change effects.

Kelly Muellman’s past projects have included assessing the comprehensive planning process in the 7-county metro area for inclusion of health and climate change; investigating the integration of climate change and health impact assessment with the environmental review process; using GIS to investigate the location of populations vulnerable to climate change effects; and development of climate change training modules around the topics of water quality and quantity, air quality, and agriculture and food security. She started at MDH in June 2011 following the completion of her Masters of Urban and Regional Planning from the Humphrey School.