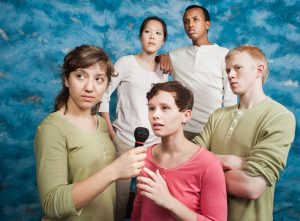 St. Paul, Minn. – The Macalester College Theatre and Dance Department presents The Laramie Project, by Moisés Kaufman and the Members of the Tectonic Theatre Project in the Janet Wallace Fine Arts Center, Main Stage Theater, 1600 Grand Ave., St. Paul, Minn. Tickets are $7 general admission and $5 for seniors and groups. Performances are at 7:30 p.m., Thu. – Sat., April 5 – 7, and Thu. – Sat., April 12 – 14and also at 2 p.m. Sat., April 7. On April 14th at 2 p.m., there will be a special free symposium about the show in the MainStage Theatre.  All are welcome.  The Laramie Project is directed by Associate Professor of Theatre Harry Waters Jr.  For ticket information, call 651-696-6359.

Research for the The Laramie Project, Moisés Kaufman’s internationally successful play, began one month after a horrific crime occurred in the city of Laramie, Wyo. In 1998, Matthew Shepard, a 21-year-old gay student registered at the University of Wyoming, was tied to a cattle fence, beaten about the head, robbed, and left to die on a bitterly cold night in October.

The play, based on more than 200 interviews with about 100 Laramie residents as well as journal entries from the members of Tectonic Theater Project, resulted in a collage of reflections and reactions to the murder of Matthew Shepard.

Structured as a documentary, it attempts to reenact the events that occurred on that fateful night. Was this a hate crime? Or was it a random, senseless assault and robbery? No matter which, Kaufman’s objective was to explore the issues of homosexuality, religion, class, economics, education, and non-traditional lifestyles through the residents’ raw responses to the incident and make them into stories.

In the end, The Laramie Project encourages us to pay attention to how we listen and what we do because the actions we take are up to each one of us as citizens in the United States and the world.