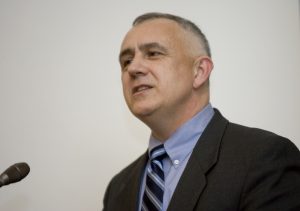 St. Paul, Minn. – Jack Weatherford, DeWitt Wallace Professor of Anthropology, will deliver the commencement speech for the 2012 graduation ceremony.  The title of his talk is “Macalester Lessons.”  Yeukai Mudzi is the senior class speaker.  Mudzi, from Zimbabwe, is an Economics major with a minor in Anthropology.

Commencement will be held at 1:30 p.m. Saturday, May 12, at the college. Macalester will be streaming commencement at macalester.edu/commencement/  Check back for updates.

Weatherford, a cultural anthropologist who has worked with contemporary groups in places such as Bolivia and the Amazon with emphasis on the role of tribal people in world history, has written several books including The History of Money, Indian Givers: How the Indians of the Americas Transformed the World, and the international bestseller, Genghis Khan and the Making of the Modern World, which has been translated into 20 languages.

He and his wife are legal residents of Mongolia, where he has concentrated his work in recent years.  In 2007, Mongolian President Enkhbayar awarded him that nation’s highest medal, the Order of the Polar Star, and in 2010 he received the Friendship Medal from President Elbegdorj.

“Jack Weatherford’s contributions to Macalester College and the world, for that matter, include telling us about the importance of Mongolia’s history, being a prolific author, and perhaps most important, being a beloved professor of anthropology,” said President Brian Rosenberg.  “He is the epitome of what Macalester professors strive to be – someone who has the curiosity to learn and the talent to pass both that curiosity and his knowledge along to others.”

Mongolia recently announced the creation of a foundation and prize in honor of Weatherford that will be awarded annually to the author of the best work of scholarship about Mongolian history or culture written in the Mongolian language.  Weatherford has taught at Macalester since 1983.

Honorary degree recipients this year include: June Lomnes Dahl ’52, professor of neuroscience, University of Wisconsin School of Medicine and Public Health; Michael McPherson, Macalester president from 1996-2003 and president of the Spencer Foundation; and Jack Weatherford, DeWitt Wallace Professor of Anthropology and 2012 commencement speaker.

Commencement ceremonies will include an academic procession led by the Macalester Pipe Band, flag bearers representing 42 countries of the 42 graduating international seniors plus the U.S. and U.N. flags, faculty in academic robes and the 442 seniors.