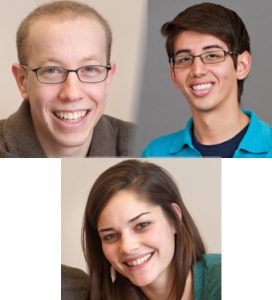 These awards mark the second consecutive year that Macalester sociology majors have earned the top prizes from Alpha Kappa Delta.

In his first-prize paper “Fermented Origins: The Emergence of State-Level Alcoholic Beverage Regulation in the Post-Prohibition Era, 1933-1935,” Carp examined why different states in the U.S. adopted one of two models for regulating alcohol after the repeal of prohibition. Carp’s paper drew on a range of data that he collected about state-level characteristics, including prevalence of the alcohol industry, previous enforcement efforts, and demographic, religious, and voting characteristics. Using fuzzy set qualitative comparative analysis, Carp found that state-level variation reflected population characteristics and institutional-level experiences with regulation. In addition, the paper used in-depth information to put those changes in context. This analysis offered new insights into the relationship between national and state-level power structures, suggesting that elite-generated agendas at the national level constrain state-level decision-making, and that subnational choices of regulatory models, although superficially adapted to various local characteristics, reinforce the power and interests of capitalist elites. Carp’s project received support from a Mellon Curricular Pathways Student-Faculty Summer Research grant.

Melo’s second-prize paper “Toward a Theory of Peripheral Welfare Development: Social Policy Legislation in Brazil, Colombia and Venezuela” examined why these three South American countries, despite significant differences in political and economic history, developed and expanded social welfare regimes in similar ways during similar eras. Based on analysis of a range of material about the history of the welfare states of the three countries from 1930 until 2000, Melo found that welfare states originated as part of state-led development projects in the 1930s. This initial development, resilience of these regimes, and subsequent changes reflect the combined influence of how the welfare state served as an instrument to connect political leaders to constituent support and how changes in international pressures shaped dominant models of welfare policy. Thus, mid-century changes, influenced by the United States, shifted policy regimes to a more liberal and less European framework while end-of-the-century global shifts witnessed an expansion of constitutional rights-based provisions. In contrast to developments in welfare states in higher-income countries, however, the promise of social welfare often remained disassociated with welfare practices.

By virtue of their awards, both Carp and Melo are automatically eligible to participate in the American Sociology Association Honors program which runs in conjunction with the Association’s Annual Meeting. Both the presentation of the awards and the Honors Program will happen in Las Vegas in August. In addition to support for travel expenses and registration fees, Carp and Melo will receive cash prizes with their awards.

In other sociology news, Carp tied for third place in the annual essay contest sponsored by the Center for Alcohol Policy, marking the first time an undergraduate student has received an award in this competition that routinely draws essays from professors, law students, and graduate students. And senior sociology major Chloe Sousa won the Associated Colleges of the Midweast annual Student Research Award for her paper “Media Screen time, Physical Activity and Nutritional Indicators as Risk Factors for childhood and Adolescent Overweight and Obesity in Aguas Zarcas, Costa Rica.”

Macalester College, founded in 1874, is a national liberal arts college with a full-time enrollment of 1,958 students. Macalester is nationally recognized for its long-standing commitment to academic excellence, internationalism, multiculturalism and civic engagement. Learn more at macalester.edu