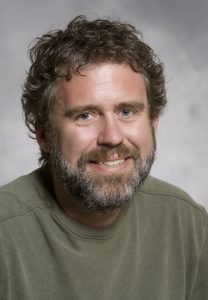 St. Paul, Minn. – Geology Prof. Ray Rogers has been awarded the 2012 Jack and Marty Rossmann Excellence in Teaching Award which recognizes “a faculty member who has been identified by colleagues and students as exemplifying the teaching goals of Macalester College.”

Professor Ray Rogers exemplifies the teacher-scholar ideal for a liberal arts college.  He is truly one of the great classroom teachers at Macalester.  Students rave about his energetic and enthusiastic classroom style.  He is described as a “riveting lecturer” with a “borderline religious enthusiasm that is infectious.”  One student writes that “his effectiveness in the classroom comes from his enthusiastic, fast-paced lecture style, and his ability to motivate students to feel like what they are doing is both important and interesting.”  Another writes that “Ray is simply a fantastic teacher – the best I had at Macalester as well as throughout my experience in graduate school.  He was demanding, but in the best possible way…His lectures always felt like team efforts – we helped sculpt the narrative with our questions while Ray creatively wove in examples and activities to make the information come alive, reaching students with many different learning styles and academic interests.”

The sentiment that Ray treats all his students with the utmost respect runs through all the nominating student letters.  One writes that “he treats each student as an individual learner, not a filled seat,” and another writes, “The first thing that struck me about Ray was the level of respect and confidence he gave to each of his students regardless of their major, grade, or apparent interest in the class.”  Many students have stated it was taking a class from Ray that convinced them to be Geology majors.  A student aptly summarizes Ray’s approach by saying, “Professor Rogers both expects the best of his students, but also gives the best to his students.”

Ray’s classroom teaching by itself puts him in the front ranks of great Macalester teachers.  But his commitment and success in mentoring students outside the classroom are equally impressive. In his 15 years at Macalester he has supervised 24 honors thesis projects.  An astonishing 29 students have presented their work with him at the two principal national meetings of his field (the Geological Society of America and the Society of Vertebrate Paleontology), and 18 of these students have gone on to the best graduate programs in geology and paleontology in the country.  In addition, 11 students have shared authorship on peer-reviewed publications (two as first authors).

The accolades from his research students rival those from his classroom students.  One writes, “In all of my research experiences with Ray, he never treated me simply as a student in his lab doing grunt work… Rather he valued my opinion, trusted my ability and challenged me to think through the questions and problems that came up during research.”  Another writes, “I felt like a peer.  My tiny project was something real and meaningful.  Ray and I were collaborators and it was this sense of confidence he gave me that ultimately convinced me to go to graduate school and do more research.”

Finally, it should be mentioned that Ray’s engagement with his students never stops at graduation.  The following comment is typical.  “Ray has had a profound effect on my career and continues to provide me with academic and career advice 8 years after my graduation from Macalester.”  This type of long-term commitment to mentoring is typical of Ray’s involvement with students who continued in academia as well as those who did not.  He’s managed to keep tabs on all 16 students from that original first year course.  Another writes, “While it has been almost 10 years since I graduated from Macalester, I am still learning from Ray.”

One former research student sums up Ray very nicely: “Even now whenever I see Ray at annual society meetings or get an update e-mail from him about how things are going at Macalester, I remember why I’ve chosen to study geology.”