BHUTAN TIME SEEMS LESS LINEAR than USA time. The Bhutanese good-naturedly call it “BST”—Bhutan Stretchable Time. One senior lecturer attending a workshop I’d organized confided in me, as we waited for other participants to arrive, “In Bhutan it is often not a good idea to be early.” In fact, we were not “early,” we were “on time” and everyone else was “late.” In Bhutan “10 minutes” can actually be 5, or 45. “After some time” could mean in a little while or next week. “Last time” could mean yesterday or last year. “Just now” could mean immediately or in an hour.

At a meeting in New Delhi when I was en route to Bhutan, a cultural affairs officer advised me that a common pitfall for Fulbright scholars in South and Central Asia is to get hung up on accomplishing things during their tenure. “As opposed to what?” I asked. I was confused, since the Fulbright application stresses the importance of the applicant completing a project while abroad. “As opposed to just being there,” he said. So I embarked on my Bhutanese journey determined not to be a slave to time and effort; determined to be a “be-er” instead of a “do-er.”

It has been harder than I ever imagined. Westerners in general are hard-wired to think time is real. I am all about being on time, making the best use of my time, getting the most out of my time, using my time wisely, saving time, and managing my time efficiently. The Bhutanese don’t seem to embrace these concepts as closely as I do. 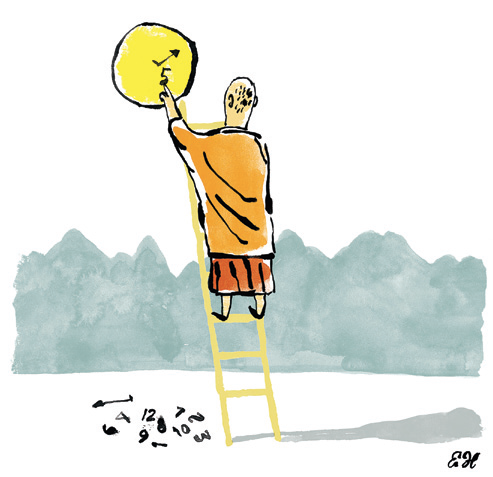 What happens when a do-er is set down in a be-er culture? Three days before the supposed beginning of a weeklong workshop I was to conduct, I still wasn’t sure whether it would happen. I confided in an Indian friend in New Delhi that I was afraid I didn’t have time to prepare properly and that I’d “look bad” because of it. “Be in the moment,” he advised. “Prepare gently but don’t be attached to the outcome.” Besides, he said, Bhutanese culture stresses humility, not ego. “You won’t be judged on how prepared you are. You’ll be judged on how many good vibes you put out into the air.” What a concept! Time and ego tangled into one unyielding knot.

I recently met the vice principal of Bhutan’s Royal Academy for Performing Arts, who a few years earlier had earned an MFA at the University of Montana. “There was a lot of culture shock,” he admitted. What was most difficult? I asked. “The timing,” he said. He experienced USA time as overly structured and stressful; people were always hurrying here and there. He knew people who—he said, eyes wide—ate lunch at their desks and read the newspaper on the toilet!

This conversation took place, by the way, while we were relaxing in the sun just after the second tea break of the day, as the RAPA dancers, swaying and turning on the grassy field near the dzong, practiced for the upcoming annual religious festival.

Buddhism teaches that time, like ego, is just a concept; letting go of both is part of becoming an enlightened being. Dzongsar Jamyang Khyentse in his book What Makes You NOT a Buddhist illustrates the conceptual nature of time (and space) with the story of the Buddhist saint Milarepa, who invites a student to take refuge from a hailstorm by joining him inside a yak horn. How can one man fit inside a yak horn, let alone two? Think about it. Anyone who has ever been in love knows how time stretches and bends in the midst of a kiss. “When Siddhartha reached enlightenment, he didn’t make time stop or reach to the end of time. He simply was no longer stained by the concept of time,” Khyentse writes; he went beyond it. “If we can go beyond the boundaries . . . then Milarepa taking shelter in a yak horn will be no more surprising than someone putting on a pair of gloves.”

I’m experimenting; gently testing Bhutan time; practicing the preparation without attachment that my Indian friend advised. When someone asks me what my plans for the day are I try to imagine that almost anything could happen: “It depends,” I say. “Just now the one thing I’m sure of is that I’d like to finish my coffee.”