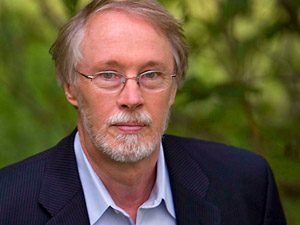 Baxter, whose most recent book, Gryphon: New and Selected Stories (Pantheon, 2011), is the Edelstein-Keller Professor in Creative Writing at the University of Minnesota.

This year’s prize judges, Lorrie Moore, Stuart Dybeck, and Bill Henderson, praised Baxter’s “original mind and ironic wit” and his “acute feeling for the landscape of marriage, childhood, and art.”

They went on to say: “Charles Baxter is a writer of elegant sentences, an expert in the mechanics of dramatic narration, and a master of psychological exile, which is the unexotic but special terrain of the short story.”

Baxter is often asked where his ideas for stories come from, and in an interview he did last year at Macalester, he said, “Stories begin when things start to go wrong.”  See more of the interview here:  http://www.macalester.edu/news/2011/02/charles-baxter-interview

Michael M. Rea founded The Rea Award for the Short Story in 1986 to be given annually to a living American or Canadian writer whose published work has made a “significant contribution in the discipline of the short story as an art form.”

The Rea Award is unique in that it is not given for a collection of stories or for a body of work, but rather for originality and influence on the genre.  The award includes a prize of $30,000.

Each year three jurors are appointed to nominate and select the winner. The jurors are selected based on their knowledge, background, and interest in the genre of the short story.