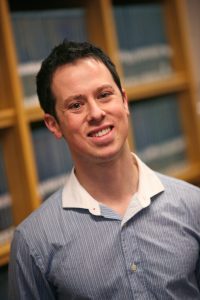 St. Paul, Minn. – Macalester Mathematics Prof. Chad Higdon-Topaz has been asked to speak at the 15th Chinese-American Kavli Frontiers of Science symposium next month.  The symposium, co-sponsored by the Chinese Academy of Sciences and the U.S. National Academy of Sciences, is the Academy’s premiere activity for distinguished young scientists.

Unlike meetings that cover a single, narrow slice of science, Kavli Frontiers of Science symposia are designed to provide an overview of advances and opportunities in a wide-ranging set of disciplines and to provide an opportunity for the future leaders of science to build a network with their colleagues.  The format encourages both one-on-one conversations and informal group discussions in which participants continue to communicate about insights gained from formal presentations and cutting-edge research in other fields. By doing so, Frontiers helps to remove communication barriers between fields and encourages collaborations. Attendees, who are selected by a committee of Academy members, are young researchers who have already made recognized contributions to science, including recipients of major fellowships and awards.

“The invitation to speak at this symposium is one of the highlights of my career,” said Higdon-Topaz.  “I’m honored to be chosen to participate and look forward to meeting colleagues with whom I hope to work in the future.”

Since its inception in 1989, more than 150 of its “alumni” have been elected to the National Academy of Sciences, and eight have received Nobel Prizes.  Many participants cite the Kavli Frontiers of Science symposium as one of the most significant experiences of their scientific careers.

Macalester College, founded in 1874, is a national liberal arts college with a full-time enrollment of 1,978 students. Macalester is nationally recognized for its long-standing commitment to academic excellence, internationalism, multiculturalism and civic engagement.  Learn more at macalester.edu.

Eight new tenure-track faculty members representing a broad range of disciplines will be joining Macalester in the coming months.

The new award was created for the express purpose of celebrating the unique and exemplary work of a member of the Macalester community.

The 2022 Jack and Marty Rossmann Excellence in Teaching Award recognizes “a faculty member who has been identified by colleagues and students as exemplifying the teaching goals of Macalester College.”