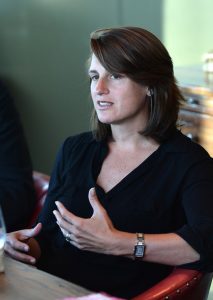 St. Paul, Minn. – Rebecca Van Dyck, Facebook’s first head of consumer marketing, has been elected to a three-year term to the Macalester College Board of Trustees.

Van Dyck began working at Facebook in February of this year. Prior to that, she was the senior vice president and chief marketing officer for Levi Strauss & Co., where she was responsible for the company’s first global marketing campaign, “Go Forth.”

Before joining Levi Strauss, Van Dyck worked at Apple, Inc. for over four years, where she was senior director of worldwide marketing communications and advertising, helping launch the iPhone, iPad, iPod and Mac products.  Prior to working at Apple, she was the global account director for Nike at Wieden+Kennedy advertising for 12 years, managing the account across four continents and leading the brand’s Global World Cup and Olympic Campaigns.

Van Dyck graduated from Macalester College in 1991 with a BA in History and Psychology, studying abroad at the University of Cairo in Egypt. She currently sits on the board of Population Services International (PSI) www.PSI.org.  She was also a board member for the Portland (Ore.) Children’s Museum and Opal School.

Macalester College, founded in 1874, is a national liberal arts college with a full-time enrollment of 2,035 students. Macalester is nationally recognized for its long-standing commitment to academic excellence, internationalism, multiculturalism and civic engagement.  Learn more at macalester.edu