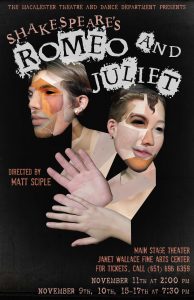 A travelling band of players breaks into an abandoned theater, audience in tow, and using only what they find inside and what they carry on their backs perform Shakespeare’s Romeo and Juliet. In the spirit of devised theater, there is no attempt to hide artifice or imperfection from the audience as the ensemble creates their own musical soundtrack, sound effects, and set, right before our eyes. Finding beauty in creativity, flexibility and ingenuity rather than in simple prettiness, the absurdity of the story is highlighted without taking away its emotional power.

All of the 14 actors will, in addition to their other roles in the show, play Romeo or Juliet–alternating, shadowing, arguing within soliloquies, and exploding simultaneously across the stage into seven straight, gay and mixed-race pairings, all forbidden, in love, and doomed by a society* stubborn enough to sacrifice the future for the past, love for hate and hope for fear.

*Any resemblance to societies living or dead is purely coincidental.