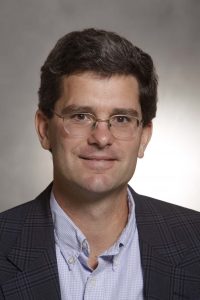 The award is “conferred in recognition of exceptional and outstanding accomplishments in publicizing geographical insights in media of general or mass communication.”

Moseley was surprised.  “I was humbled to learn that I have been awarded the AAG Media Achievement Award,” said Moseley.  “This is totally unexpected, but I am very pleased.  What a nice and wonderful bit of news.”

The citation says, “Over the past few years, no academic geographer has used the media more effectively to bring the insights of geographical scholarship to the general public than Professor William G. Moseley. Driven by a desire to raise public awareness of issues ranging from poverty and hunger in Africa, to environmental degradation, to the vulnerabilities of American industrial agriculture, Professor Moseley has written wide ranging, thought-provoking opinion pieces in influential newspapers ranging from The New York Times and the International Herald Tribune to The Christian Science Monitor and the San Francisco Chronicle. He has also been interviewed on major radio and television stations, including the BBC and the Voice of America.  Through his efforts, Professor Moseley has helped countless readers and listeners think about the world in a richer, more geographically informed way.

“The recent famine in the Horn of Africa and the disintegration of the Malian state led to particularly impressive efforts by Professor Moseley to use the media to promote insight and understanding. Professor Moseley’s commentaries were so effective in part because they were rooted in his own impressive scholarship, which has appeared in some of development geography’s most important journals, as well as in influential journals that reach across academia, including the Proceedings of the National Academy of Sciences. Not only does Professor Moseley strive to bring his views to the general public; he constantly encourages his students to do so as well. He firmly believes that scholars, and especially geographers, have an obligation to make their knowledge, experience and insights available to the widest audience possible. His career is a testament to his commitment to this idea.”

Moseley will be recognized at the AAG’s annual meeting in Los Angeles on April 13, 2013.