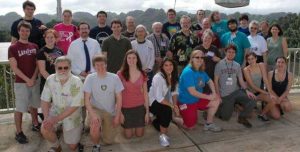 St. Paul, Minn. – The National Science Foundation (NSF) has awarded Macalester College and 18 other colleges and universities across the United States a three-year collaborative grant in the amount of $437,883 in support of undergraduate research.  The 19 undergraduate-focused institutions are a consortium known as “The Undergraduate ALFALFA Team” (UAT).

This NSF-funded work with UAT will provide Macalester Astronomy Professor John M. Cannon and his undergraduates hands-on observation and data analysis experience at world-class observing facilities in Puerto Rico and New Mexico.  Further, the grant will fund travel to annual UAT workshops and national conferences, as well as support Macalester student summer research programs. In the next three years, the UAT will build on the infrastructure, faculty/student training and productive workshops of its highly successful first five years, which involved 158 undergraduates and 22 faculty mentors at its diverse set of institutions.

Students are engaged in all aspects of the ALFALFA (Arecibo Legacy Fast ALFA, where ALFA refers to the Arecibo L-band Feed Array detector) survey.  Led by Cornell University Professors Riccardo Giovanelli and Martha Haynes, ALFALFA is the most extensive and most sensitive large-scale astronomical survey to date of the neutral hydrogen in the local universe at radio wavelengths of 21 cm.  The survey has detected more than 20,000 galaxies out to a distance of 750 million light-years using the world’s largest radio telescope, the 305-meter Arecibo Observatory in Puerto Rico.

Through this NSF grant, Macalester students will take part in ALFALFA observations, data analysis, and research projects that include the impact of environment on the star formation properties and evolution of galaxies in groups, a complete census of atomic gas in the Milky Way and in the local universe, and targeted follow-up investigations of very low-mass ALFALFA sources (including the discovery of mysterious “dark galaxies” that have neutral hydrogen but appear to be starless).  Macalester physics majors Elijah Bernstein-Cooper ‘13, Clara Thomann ’13 and Melissa Marshall ’14 have already participated in ALFALFA research and activities.

Macalester College, founded in 1874, is a national liberal arts college with a full-time enrollment of 2,035 students.  Macalester is nationally recognized for its long-standing commitment to academic excellence, internationalism, multiculturalism and civic engagement.  Learn more at macalester.edu.