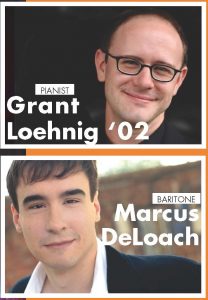 Grant Loehnig, a 2002 Macalester graduate who received his Masters of Music degree in vocal accompanying from Manhattan School of Music, is on the faculty of Rice University’s Shepherd School of Music. He is also on the music staff of Wolf Trap Opera Company, where he currently serves as the Wolf Trap Opera Studio Manager and Chorus Master. A recent graduate of the Houston Grand Opera Studio, Loehnig has performed in the orchestras of Hansel and Gretel and Die Zauberflote.  He can be heard as the solo pianist on the premiere recording of Lee Hoiby’s A Month in the Country, released by Albany Records.

The New York Times has called Marcus DeLoach “a fine baritone who puts words across with clarity and naturalness.” He is considered one of the leading performers of contemporary classical music today and has established himself in the areas of opera, concert, and cross-over. He has performed with the MuÌnchner Philharmoniker, the London Symphony, the New York Philharmonic and the Seattle Opera. DeLoach holds both Bachelor and Master of Music degrees from The Juilliard School and is currently engaged in doctoral studies at Rice University’s Shepherd School of Music.

Macalester College, founded in 1874, is a national liberal arts college with a full-time enrollment of 2,035 students.  Macalester is nationally recognized for its long-standing commitment to academic excellence, internationalism, multiculturalism and civic engagement.  Learn more at macalester.edu.