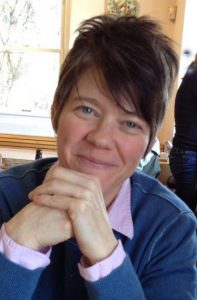 St. Paul, Minn. – Art Professor Christine Willcox has received a $30,000 fellowship from the George A. and Eliza Gardner Howard Foundation in Providence, R.I.  She is one of nine recipients who represent the fields of the History of Art and Architecture, Painting, and Sculpture. Willcox’s project is called The Still Point.

The Howard Foundation awards a limited number of fellowships each year for independent projects in selected fields. The Foundation targets its support specifically to early mid-career individuals, those who have achieved recognition for at least one major project.  Howard Fellowships are intended primarily to provide artists and scholars with time to complete their work.

“I feel honored to receive this grant which will allow me extended time to continue working on my current painting series,” Willcox said.  “I will also travel to France and Belgium this fall to research WWI battlefields as part of this project.”

Willcox was born and raised in Toronto and has taught at Macalester since 2000. She has shown her paintings in group and solo exhibitions in the United States and Canada, most recently with a solo show of new work at the Minneapolis Institute of Arts and the Phipps Center for the Arts, in Hudson, Wis. Other exhibitions include: “Critical Translations,” at the Katherine E. Nash Gallery, University of Minnesota and “Postcards from the Edge,” an AIDS benefit in New York City. She is the recipient of a Fulbright Scholarship, and in 2005, received a Minnesota State Arts Board Artist Initiative Grant.  In 2011, she attended professional artist residencies at The Banff Arts Center in Alberta and Anderson Ranch Arts Center in Colorado.

The George A. and Eliza Gardner Howard Foundation was established in 1952 by Nicea Howard in memory of her grandparents. Ms. Howard had a special interest in furthering the personal development of promising individuals at the crucial middle stages of their careers in the liberal and creative arts.  The Howard Foundation is an independent agency administered by Brown University.

Maccolades is a monthly round-up of the most recent accolades and accomplishments earned by members of the Macalester community. Below are highlights from November 2022.

Maccolades is a monthly round-up of the most recent accolades and accomplishments earned by members of the Macalester community. Below are highlights from October 2022.

Maccolades for Summer 2022: Brainy athletes, a Hollywood adaptation, and more

Maccolades is a monthly round-up of the most recent accolades and accomplishments earned by members of the Macalester community. Below are highlights from Summer 2022.