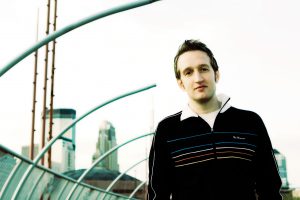 St. Paul, Minn. – Macalester English Professor Peter Bognanni is one of 19 writers who’s been granted an American Academy of Arts and Letters 2013 award in literature. The awards will be presented in New York in May at the Academy’s annual Ceremonial.

Bognanni will go to Rome as a literature fellow for a one-year residency (2013–2014) at the American Academy in that city.  The 2001 Macalester graduate is in good company. Past winners of the Rome Prize include Junot Diaz, Lorrie Moore, Padgett Powell, Cormac McCarthy, Ann Sexton, and Ralph Ellison.

“It’s an amazing honor to receive this award,” said Bognanni.  “I look forward to working in Rome for a year and being inspired by the other artists at the Academy.”

The Academy is currently comprised of 250 of America’s leading voices in the fields of Art, Architecture, Literature, and Music. The Academy presents exhibitions of art, architecture, and manuscripts, and readings and performances of new musicals. It is located in three landmark buildings designed by McKim, Mead & White, Cass Gilbert, and Charles Pratt Huntington, on Audubon Terrace at 155 Street and Broadway, New York City.