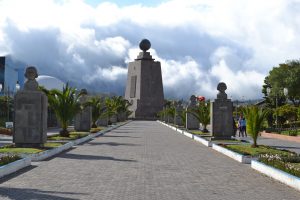 St. Paul, Minn. – Macalester History Professor Ernesto Capello has been awarded a National Endowment for the Humanities (NEH) fellowship to research the impact of a French scientific mission to Ecuador for a future book he is writing.

Capello received a $50,400 award from the Fellowships for College Teachers and Independent Scholars program at the NEH for his project The Economic, Scientific, and Artistic Impact of the 1901-1906 French Geodesic Mission to Ecuador.  Only seven percent of the fellowship proposals submitted to the NEH are selected for funding.  His 12-month grant period runs through December 31, 2013.

Capello has already begun research in Ecuador and France for his book that focuses on the social, artistic, and economic ramifications of the French Geodesic mission to Ecuador over 100 years ago.

“While Geodesy is an unusual branch of geographic science dedicated to measuring the shape of the Earth,” Capello notes, “in Ecuador every child knows the story of the 18th-century Franco-Hispanic Geodesic Mission, when an international group of scientists led by the Frenchman Charles Marie de La Condamine traveled to the Spanish colony to measure the arc of the equatorial meridian.”

Their goal: to verify Isaac Newton’s theory of gravity.

“Using underexplored French and Ecuadorian archival sources, I argue that the 1901-1906 mission played a critical role in linking centuries of economic, scientific, and artistic representation of equatorial nature into a palatable form designed to cement state power and foster a tourist economy,” said Capello.  “My book will also examine the extensive contestation engendered by this project, both in the early twentieth century and in subsequent decades.”

In his first book, City at the Center of the World: Space, History, and Modernity in Quito, Capello analyzed the formation of modernity, memory, and myth through the eyes of diverse populations in Quito, Ecuador’s capital city.