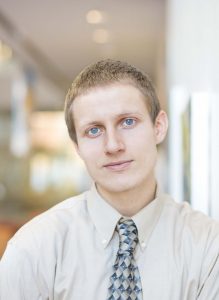 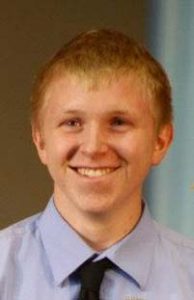 St. Paul, Minn. – Andrew B. Keefe ‘13, a senior from Minneapolis, Minn., double majoring in Linguistics and Media and Cultural Studies, and Zachary W. Avre ‘14, a junior from Sioux Falls, S.D., majoring in Geography, have been named 2013 Truman Scholars. Scholars were elected by independent selection panels on the basis of leadership potential, intellectual ability, and the likelihood of ‘making a difference.’

Each Truman Scholarship provides up to $30,000 for graduate study. Scholars also receive priority admission and supplemental financial aid at some premier graduate institutions, leadership training, career and graduate school counseling, and special internship opportunities within the federal government. Recipients must be U.S. citizens, have outstanding leadership potential and communication skills, be in the top quarter of their class, and be committed to careers in government or the not-for-profit sector.

“After college I want to dedicate my life to closing the racial and socioeconomic achievement gaps that pervade the U.S. education system, said Keefe. “These issues hit home for me because I grew up navigating Minneapolis public schools, where I witnessed some of their consequences firsthand such as a 45% disparity in graduation rates between black and white students. Sociolinguistic bias in education is partially responsible because urban centers with large populations of English language learners like the Twin Cities suffer from policies that don’t offer nearly enough serious recognition of non-English speaking communities. I intend to work towards bringing multilingualism and sociolinguistic inequality to the fore in federal education initiatives.”

Keefe is also very appreciative of all the support he received from Macalester faculty during the application process.  “Applying for the Truman made me realize how lucky I am to be a part of the Macalester community.”

“Being selected as a Truman Scholar affirms not only the work I have done thus far but all of the support that I have been given along the way,” said Avre. “I am excited to join a community of passionate and engaged Scholars, who, like myself, are committed to enacting change in our world. I’m inspired by the faith and confidence the Foundation has invested in me to actualize my vocational aspirations through a life of public service.”

Keefe and Avre are two of 62 students from 54 U.S. colleges and universities to be named Truman Scholars this year.

After graduating from Macalester, Keefe has accepted a full-time position teaching Spanish at Language Sprout in St. Paul, the organization at which he’s currently working.  He will also work at several public schools in St. Paul in addition to teaching private lessons. Next year, he’ll intern at the Minneapolis Latino Economic Development Center (LEDC).  Keefe hopes to earn a PhD in Race, Inequality, and Language Education (RILE) through Stanford University’s Social Sciences, Humanities, and Interdisciplinary Policy Studies in Education (SHIPS) program.

The mission of the Truman Scholarship Foundation is to find and recognize college juniors (Keefe is graduating early which also makes him eligible) with exceptional leadership potential who are committed to careers in government, the nonprofit or advocacy sectors, education or elsewhere in public service; and to provide them with financial support for graduate study, leadership training, and fellowship with other students who are committed to making a difference through public service.

Congress established the Truman Scholarship Foundation in 1975 as the federal memorial to the thirty-third President. The foundation awards scholarships for college students to attend graduate school in preparation for careers in government or elsewhere in public service. There have been 2,730 Truman Scholars selected since the first awards were made in 1977.