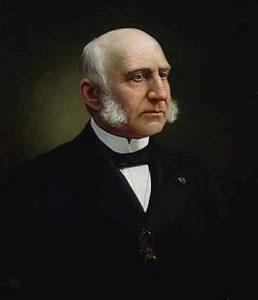 St. Paul, Minn. – Macalester College has renamed its Humanities Building Neill Hall after the Rev. Edward Duffield Neill (1823 -1893), founder and first president of the college.  The Board of Trustees voted last weekend to make the change.

Neill, an ordained Presbyterian minister from Philadelphia, first came to the Minnesota Territory in 1849 and was the founding pastor of two St. Paul Presbyterian churches, House of Hope and First Presbyterian. Later, he was appointed the first Superintendent of Public Instruction for the State of Minnesota and then became the first Chancellor of the University of Minnesota.

During the Civil War, Neill served with the First Minnesota Volunteer Infantry through the Battle of Malvern Hill, leaving the regiment in 1862 when he was appointed Hospital Chaplain for the Union Army.

In 1870 he resigned from governmental service and returned to Minnesota.  He founded Macalester and became its first president in 1874.  He stepped down from the presidency in 1884, but stayed at Macalester as professor of history, and literature until his death in 1893.

Macalester’s early years required perseverance and dedication between when Neill obtained its charter from the Minnesota Legislature in 1874 and received Philadelphia businessmen Charles Macalester’s gift, which finally allowed the college to open in 1885 at the corner of Summit and Snelling Avenues with five professors, six freshmen, and 52 prep students.

Neill planned a college that would be equal in academic strength to the best colleges in the East. It would be Presbyterian-affiliated but nonsectarian, making it inclusive by the standards of his day.  He believed that only a private college could offer both the academic quality and the values needed to prepare for leadership. His educational philosophy included a deep belief in the value of private education that encouraged personal growth, self-reflection, rigorous work, leadership skills, and civic action.

Macalester College, founded in 1874, is a national liberal arts college with a full-time enrollment of 2,011 students. Macalester is nationally recognized for its long-standing commitment to academic excellence, internationalism, multiculturalism, and civic engagement. Learn more at macalester.edu.

How climate change is affecting our mental health

Dr. Christie Manning, an environmental psychologist and Macalester’s director of sustainability, aims to highlight the negative effects of climate change on our mental health.