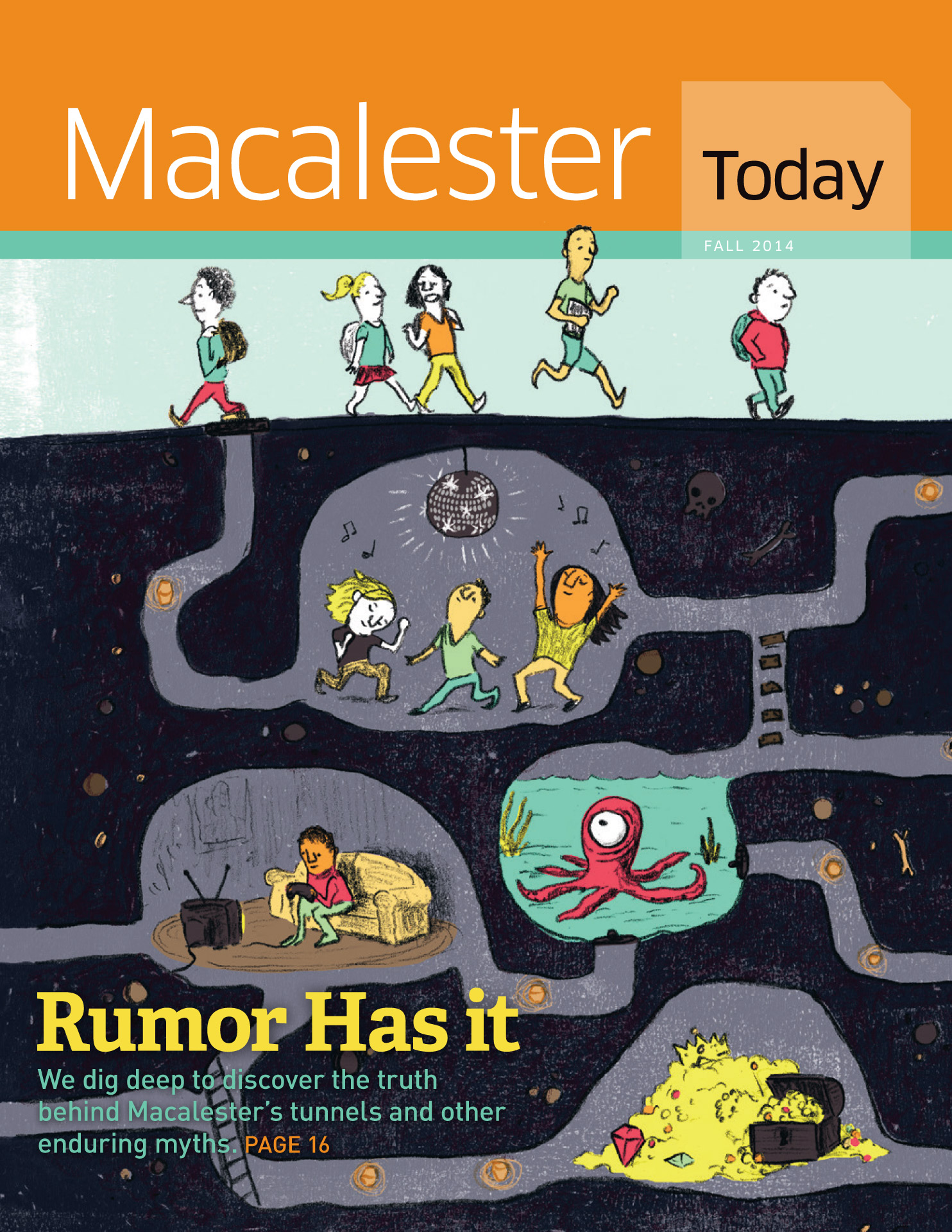 Maybe you were on a campus tour when you heard that Macalester alum and benefactor DeWitt Wallace brought a cow to the top of chapel when he was a student. Perhaps you were strolling past Old Main when a friend mentioned the time that Carleton students ferried “the rock” down to Northfield, then mailed it back—postage due. Like any school with more than 100 years of history, Macalester has a treasure trove of incredible tales that seem true enough. Tell the stories often enough, and they develop a sheen of authenticity that seems too good to fact-check. Until now. To find out the truth behind Macalester’s own urban legends, we dug deep into the archives with archivist and special collections librarian Ellen Holt-Werle, called up experts from Macalester and beyond, and scoured the Web for supporting details. The tales you’ve heard are sometimes true. They’re sometimes false. And they’re sometimes not nearly as interesting as what actually happened.

Rumor #1: Dupre was designed as a riot-proof dorm, and was a “cast-off” design from another college. 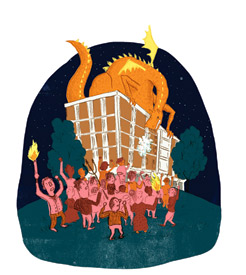 The backstory: There’s plenty to love about the Macalester’s campus architecture—the beautiful, historic Old Main, the bright and spacious Leonard Center. But you’ll have to forgive us if we don’t sing the praises of the boxy structure with tiny windows on the northern edge of campus that looks as if it were built on stilts to prepare for Minnesota’s non-existent hurricane season.

Students have long speculated that Dupre looks as it does—concrete with gun-turret-style windows—because it was designed to be riot-proof. Those narrow windows would certainly prevent unruly students from hurling chairs from the top story, for example.

But the facts get in the way. While student unrest was something that administrators had to seriously consider by the late 1960s, Dupre was built in 1962, years before student outrage had reached a fever pitch. Macalester administrators may be forward thinking, but they’re not fortunetellers.

Other theories hold that Macalester, strapped for cash, simply borrowed the design of the dorm from one at the University of Miami, where student housing might actually be required to withstand hurricanes.

But in 2006, then-Dupre Hall director Brian Curfman debunked the rumors with the even (ahem) uglier truth. “Dupre’s architecture is representative of many buildings that were built across the country at that time,” he told The Mac Weekly, a style known as Brutalist architecture, examples of which are found on campuses across the world. Still, the riot-proof dorm assumptions have proved surprisingly durable and widespread: Kenyon, Yale, and Colgate students also frequently (and inaccurately) insist that their ’60s-era dorms were built to quell rioting students.

Rumor #2: DeWitt Wallace led a cow to the top of Old Main.

True or False: False. (Macalester has been the site of at least one cow prank, but Wallace was probably not among the practical jokers.) 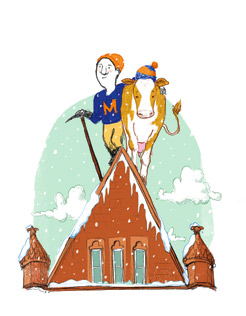 The backstory: There’s a reason that the definitive book of college pranks is called If at All Possible, Involve a Cow: Bringing livestock to the top of a campus’s tallest building is one of the most popular college pranks of all time, and Macalester is no exception.

While you might be hard-pressed to find a cow in the heart of St. Paul today, that was not the case a century ago. On Halloween night 1923, as part of what may be the most extensive collection of stunts ever conceived and executed at Macalester in a single night, a cow was indeed brought to the third floor of Old Main (then the chapel) “I don’t really know who took the cow up to the chapel,” reported Mabel Frey ’24 in a 1978 issue of The Mac Weekly. “Those sorts of things were kept hush-hush. But I remember there were also chickens in the women’s restroom.” Frank Paskewitz ’25 confirmed both the cow and chicken stories.

But it turns out that the cow and the chickens were only the crowning achievements of a crazy night. According to stories recounted by alums, pranksters didn’t just bring livestock into Old Main: they painted sidewalks and smokestacks, tossed toilet paper around, and hung a toilet from the building’s ceiling. They also barricaded classroom doors with chairs and sealed them shut with plaster of paris. Richard Hokel ’27, who recounted the story years later in a Mac Weekly story, recalled that the dean was furious. “Everyone else,” he told the Weekly, “enjoyed the day.”

Because Wallace left Macalester in 1909, it’s unlikely that he participated in the events of that night. Mac’s famous benefactor may not have been a paragon of virtue as a student, but he never copped to any farm animal pranks either.

Rumor #3: Carleton stole Mac’s rock and returned it postage due. 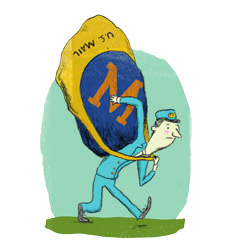 The backstory: It’s brilliantly devious, the idea that Carleton students would spirit the much-beloved 700-pound rock from Macalester’s campus, only to return it at massive expense to Macalester. It’s just the sort of thing those wiley Carls—forever trying to rub their supposed superiority in Macites’ faces—would do. It’s a fantastically crazy tale. And it just may be too good to be true.

To be fair, the tale comes up in a 1965 Mac Weekly story about the rock. Yet even in that reference it is mentioned only in an aside, the source of which already seemed lost to the mists of time. “A few years ago,” the author wrote in that 1965 article, “The Rock found its way to Carleton and was mailed back—collect!”

But that’s it: A single sentence referring to an event that happened at some indeterminate point in the past, a tale that didn’t merit any ink when it happened. The story is mentioned repeatedly in future articles, but always referring back to that single line in that single story in 1965.

Perhaps it makes sense, though, that Macalester wouldn’t want to share the details of this humiliating prank in its paper of record. So we decided to check with Carleton. Surely a prank so clever would be recounted in the greatest possible detail by Carleton alumni for generations? Perhaps written up in a celebratory front-page story for the campus newspaper?

Longtime Carleton College archivist Eric Hillemann admits that the tale came as a surprise to him. “In 24 years as Carleton’s archivist, I’ve heard a lot of good Carleton stories being savored and resavored in conversations with alumni and others, including a lot of very good prank stories,” he says. “But I do not recall ever hearing so much as a whisper of this.” After checking the college archives, he found that no story concerning the supposed prank had ever appeared in Carleton’s campus paper, The Carletonian.

To double-check his memory and that of the newspaper, he contacted the members of Carleton’s alumni listserv, asking them to share any details they had heard—or perhaps to encourage the guilty party to come forward. Not a single story surfaced.

Of course, while it’s often easy to confirm a tale, dis-confirming a story like this can be nearly impossible. Still, we’re pretty convinced that this story is apocryphal. 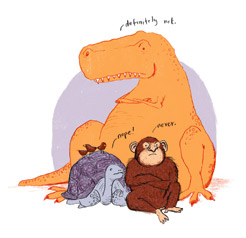 The backstory: If you thought the battle over teaching intelligent design in schools has been intense recently, you might look back at the evolution-in-the-schools war that raged in St. Paul in the mid-1920s. Jeanne Halgren Kilde lays out the tale in all of its astonishing detail in Nature and Revelation: A History of Macalester College (University of Minnesota Press, 2010).

In 1926, a Macalester donor wanted to know if the school was corrupting students with “evolutionary thinking.” It was a serious charge, and then-president John Acheson wrote the donor back, stating that, “No Godless evolutionary theory is being exploited at Macalester College in any department of the institution.” The reality is likely messier— the much-beloved biology professor O.T. Walter was teaching at the school then, and at least one alumna remembers him teaching evolution in the 1930s.

When another supporter hurled the evolution accusation at Macalester while President Acheson was on an extended vacation, the Virginia, Minn., minister and Macalester parent Arthur G. Bailey stepped in to state that key religious allies believed “the safest institution in [Minnesota], and most free from godless evolution…was Macalester College.” (The real culprits, according to religious leaders at the time, were Carleton College and the University of Minnesota.) Up through at least 1928, Macalester administrators continued to firmly refute any rumors that the school was teaching evolution to its students.

Today, of course, even impressionable first-year students can sign up for the class History and Evolution of the Earth, in which they learn all about evolution during our planet’s 4.6 billion years of existence.

True or false? True (though they’re not secret) 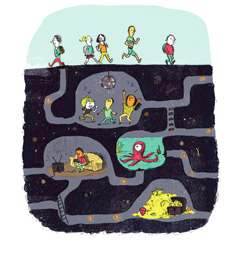 The backstory: What’s not to like about secret passageways? They lead to Narnia or the Batcave and hold magic potions and priceless treasures, right? Well, not all of them, and certainly not those beneath Macalester. The college’s tunnels are strictly utilitarian, says director of facilities services Nathan Lief. Starting in the basement of the fine arts center and branching out to each building on campus, these tunnels bring utilities—such as steam, chilled water, and electric power—across campus.

If you don’t recall seeing a tunnel entrance during your student days, it’s for good reason. The 13,000-volt utility feeds and high-pressure steam can both be lethal, which is why entrances are unlabeled, found in out-of-the-way corners, and behind locked doors. In other words, students won’t be using them as underground passageways to classes anytime soon.

Even facilities staff members rarely venture into the tunnels, since appropriate preparation can be extensive. “We have to force air through to make sure there’s a non-stagnant environment,” Lief says. “We sometimes have to do environmental testing to make sure there’s not a buildup of carbon monoxide or dioxide. We have to set up lifelines so that if something should happen, the person inside can be rescued.”

And besides that, the tunnels are just generally unpleasant. “They’re dark. They’re dank. Have you ever seen Nightmare on Elm Street? It’s like that,” says Lief. “There’s nothing nice about them.”

Rumor #6: Dancing was once forbidden at Macalester. 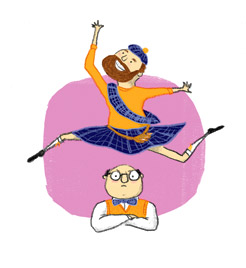 The backstory: There was a time when the President of Macalester himself set the school’s dancing policy, which was this: no opposite-sex dancing, period.

For at least the first 29 years of the college, dancing was forbidden at the school with a slippery slope argument. President James Wallace insisted—to the St. Paul Pioneer Press, no less—that it led to “spoonery,” but by the early 1900s, support for the policy started to crumble.

To express their dissatisfaction with the draconian policy, Mac students did what they have always done: first, they had a spirited debate. And then they took action. According to Jeanne Halgren Kilde’s Nature and Revelation, in early 1903, students in the literary society hosted a debate on the dancing ban. Though no results were recorded, we’re willing to bet that the debate was not settled by a dance-off. At any rate, the campus remained dance-free.

Later that year, with the no-dancing policy still in force, students staged their own form of protest. After a late-night social at the YWCA, a dozen couples climbed up to the Macalester chapel’s third floor. They locked the door, put a student on guard, and held a tiny, illicit ball. “We didn’t dare turn on the lights,” one student later told the St. Paul Pioneer Press. “They would have been easily seen from the professors’ homes, so we danced in the dark.”

Though Wallace called the incident “scandalous and diabolical,” none of the students were disciplined, and the no-dancing rule was later abandoned.