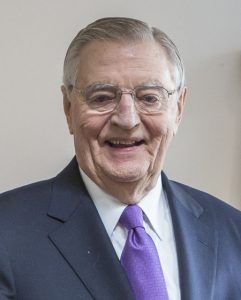 “Walter Mondale is a legend in the state of Minnesota and someone we cherish here at Macalester College,” said President Brian Rosenberg.  “This year’s seniors are fortunate to have the former Vice President as their speaker. He truly is the embodiment of thoughtful, humane, and selfless service to others.”

Walter F. Mondale’s record of public service includes Vice President of the United States, U.S. Ambassador to Japan, U.S. Senator, and Attorney General for the State of Minnesota.  He was also the Democratic Party’s nominee for President in 1984.  He is currently Senior Counsel with the law firm of Dorsey & Whitney LLP, headquartered in Minneapolis with 20 offices worldwide.

In 1964, Governor Karl Rolvaag asked him to fill the U.S. Senate vacancy created by Hubert Humphrey’s election to the Vice Presidency.  The voters of Minnesota returned Mondale to the Senate in 1966 and 1972.

Jimmy Carter and Walter Mondale were elected President and Vice President of the United States on November 2, 1976.  On the President’s behalf, Mondale traveled extensively throughout the country and the world advocating U.S. policy.  He played a central role in Carter Administration policy of expanding commercial ties between the United States and China.  He was the first Vice President to have an office in the White House, and he served as a full-time participant, advisor, and troubleshooter for the Administration.  During this period, Joan Mondale served as a national advocate for the arts and was Honorary Chairman of the Federal Council on the Arts and Humanities.

In 1984, Mondale was the Democratic Party’s nominee for President of the United States.  Following that election, Mondale practiced law, taught, studied, traveled, and served as a director of both non-profit and corporate boards.  He returned to his native Minnesota in 1987, where he practiced law with the firm of Dorsey & Whitney until President Clinton nominated him to be the U.S. Ambassador to Japan.

Mondale served as Ambassador to Japan from August 13, 1993, to December 15, 1996. Since returning from Japan, Mondale has become a director of several non-profit and corporate boards.  He is the chair of The Maureen and Mike Mansfield Foundation.  He also co-teaches a class at the Humphrey Institute at the University of Minnesota on the study of governance and politics.

In March 1998, serving as President Clinton’s special envoy, Mondale traveled to Indonesia to meet with President Suharto regarding the Asian financial crisis and economic reforms in Indonesia.

Before his appointment as U.S. Ambassador to Japan, Walter Mondale was a Distinguished University Fellow in Law and Public Affairs at the Hubert H. Humphrey Institute of Public Affairs, University of Minnesota.  In 1990, he established the Mondale Policy Forum at the Humphrey Institute to bring together leading scholars and policymakers for conferences on domestic and international issues.

Mondale was married to the former Joan Adams for 58 years before she passed away in February 2014. She graduated from Macalester in 1952 and was a life-long Macalester supporter. Last year, the new Studio Art building was renamed the Joan Adams Mondale Hall of Studio Art.  The Mondale’s have three children, Theodore, Eleanor Jane (deceased) and William. They also have four grandchildren.

Mondale has authored two books The Accountability of Power:  Toward a Responsible Presidency and The Good Fight:  A Life in Liberal Politics and has written numerous articles on domestic and international issues.  In his free time, he enjoys fishing, reading historical accounts, and spending time with his family.

Macalester College, founded in 1874, is a national liberal arts college with a full-time enrollment of 2,045 students. Macalester is nationally recognized for its long-standing commitment to academic excellence, internationalism, multiculturalism, and civic engagement. Learn more at macalester.edu.

Maccolades is a monthly round-up of the most recent accolades and accomplishments earned by members of the Macalester community. Below are highlights from November 2022.

Maccolades is a monthly round-up of the most recent accolades and accomplishments earned by members of the Macalester community. Below are highlights from October 2022.