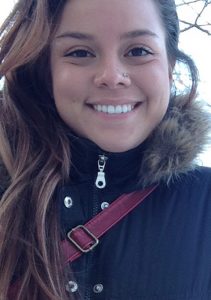 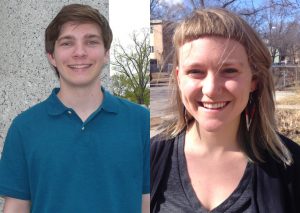 They will join students and recent graduates from universities in Bosnia and Herzegovina, Denmark, France, Germany, Greece, the Netherlands, Poland and Ukraine to participate in the Humanity in Action Fellowship in Europe. The Fellowship will take place in Amsterdam, Berlin, Copenhagen, Paris and Warsaw from May 25 to June 28, 2015.

Sarah Dillard ’15, a double major in International Studies and Geography from Bellingham, Wash, will be in the Danish program. Throughout her time in college, Dillard’s undergraduate studies in Arabic have led her to study in Amman, Jordan and Manah, Oman. In the past, she has worked as a Camp Counselor for Seeds of Peace, a cross-conflict dialogue NGO (non-governmental organization) and has been involved in several organizations related to the Palestinian-Israeli conflict. She is currently an intern for Mizna, an Arab-American arts and culture organization that publishes the only literary journal devoted to Arab-American writing. In addition, Dillard has sung in choirs and a cappella groups for most of her life and is interested in work related to healing and community building through music. She hopes to one day work as a journalist in the Middle East.

Emily Lawson ’15, an Anthropology major, with concentrations in African Studies and Community and Global Health from Alexandria, Ind., will be going into the Dutch program.  Growing up in central Indiana, Lawson observed ways that written law marginalized members of her community. As such, she honors lived experiences as powerful narratives to inform social policy and has conducted research that promotes this belief in the academic sphere. Most recently, Lawson assessed the social networks that young, Zulu single-mothers in a Durban, South Africa township use to access health information. Her research also explored how these social networks impacted their health care decisions. In the U.S., Lawson has evaluated the effectiveness of a community health program designed to connect frequent emergency department users with primary care physicians for preventive care. Currently, she works with women in recovery from substance abuse at a residential treatment center. She plans to pursue a graduate degree in anthropology and behavioral health, focusing on women and children.

Luke Allen ’14, from Iowa City, Iowa, graduated from Macalester in 2014 with a double major in International Studies and Political Science and will be in the Dutch program. His primary interests lie at the intersection of human rights and human development issues. This led him to spend a semester abroad in Senegal, where he studied international development and interned with a local development NGO. He has also worked closely with immigrant and refugee communities in Minnesota and Iowa. Most recently, Allen has worked as a law clerk for an immigration law firm in Minnesota to meet the legal needs of the immigrant community in the Twin Cities.

Camille Erickson ’14, from Chicago, Ill., graduated from Macalester in 2014 with a double major in Art History and International Studies and was selected for the Humanity in Action Fellowship in Warsaw, Poland. While attending Macalester she coordinated the sexual health education program. Through the program she led initiatives to combat sexual violence and provide more inclusive sexual health resources to all students. Erickson’s research explored global feminist and LGBTQ contemporary art that initiates dialogues about community formation and political engagement. Erickson now lives in Minneapolis where she works at the Minneapolis Art Lending Library and the Minnesota Center for Book Arts.

Humanity in Action Fellows are selected on a highly competitive basis for their high academic standing, active civic participation in human rights issues and outstanding recommendations. Humanity in Action received a record 688 applications from 253 American colleges and universities for the 2015 Fellowship. Humanity in Action supports all Fellows financially for the duration of their programs, allowing for the merit-based selection of diverse applicants.

The Humanity in Action Fellowship is highly interdisciplinary and features daily lectures and discussions with renowned academics, journalists, politicians and activists, as well as site visits to government agencies, non-profit and community organizations, museums and memorials. The programs seek to highlight different models of action to remedy injustice relating to diverse societies.

Since 1999, Humanity in Action has engaged more than 1,500 Fellows in its transatlantic study programs focusing on human rights and minority issues—past and present—in Denmark, France, Germany, the Netherlands, Poland and the United States.

Macalester College, founded in 1874, is a national liberal arts college with a full-time enrollment of 2,045 students. Macalester is nationally recognized for its long-standing commitment to academic excellence, internationalism, multiculturalism, and civic engagement. Learn more at macalester.edu

Tips on how to find that first job after college

Mindy Deardurff, dean of Career Exploration, offers some advice and reassurance, plus a helpful reminder that one of the many perks of being a Macalester alum is a lifetime of career support.

Maccolades for April 2021: Fulbright to France, NEA grant, and new books on salvage tourism and Shakespeare

American Studies and Political Science Professor Duchess Harris is the recipient of the 2021 Thomas Jefferson Award.

The study examines two versions of an educational video about COVID-19 mRNA vaccines, one narrated by a man and the other by a woman.