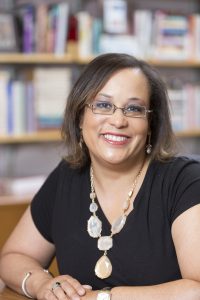 St. Paul, Minn. – The Minnesota Association of Black Lawyers (MABL) has chosen American Studies professor Duchess Harris as this year’s recipient of the Profiles in Courage Award. Harris will receive the award on Nov. 14th, at the MABL Annual Scholarship Gala honoring the organization’s 20th anniversary.

Harris, an author, scholar and professor in the American Studies Department at Macalester College who holds a PhD in American Studies and a law degree, was surprised at receiving the honor.

“In 1993 I accepted the award on behalf of Senator Paul Wellstone because he was in Washington, D.C.,” said Harris. “I couldn’t have imagined winning it myself 22 years later.”

She is a prolific writer with more than 20 peer-reviewed articles in publications such as the London School of Economics Review and the National Political Science Review.  She has published three books addressing subjects ranging from black feminism to race and the Republic, and the state of race relations and law enforcement, including events that have inspired the Black Lives Matter movement.

Harris has received numerous honors for her scholarship, both as a student and as a professor. Harris’ pubic service has included appointments as a Minneapolis Civil Rights Commissioner, a member of the Council on Black Minnesotans, and service as a co-chair for the Governor’s Dr. Martin Luther King, Jr. Statewide Holiday event, twice.  She continues to serve on the Shirley Chisholm Presidential Accountability commission, and she has presented before the Congressional Black Caucus.  She has most recently been in the news for writing a book titled Black Lives Matter for middle school-aged children.

Shelley Carthen Watson ‘82, the 2015 Catharine Lealtad Service to Society Alumni Award winner and an attorney in the University of Minnesota’s Office of the General Counsel, nominated Harris for the award.

“MABL bestows the award annually on an individual or entity that has demonstrated the highest level of courage, excellence and integrity in furthering the organization’s mission of representing the interests of Black citizens in the legal profession and in the judicial system,” said Carthen Watson.  “There are few women that I admire more.”

“In addition to being an accomplished and nationally recognized history and legal scholar, she is a stalwart in defending the rights of women and people of color,” said Carthen Watson. “She does not hesitate to speak truth to power, both in her teaching and her publications.  She truly believes in paying if forward.”

Others also being honored at the black-tie gala include Cornell Leverette Moore of Dorsey & Whitney LLP, and Kimberly Foster Price, Vice President of 3M gives and the 3M Foundation.  Harris, Moore and Price are being recognized as community leaders having been instrumental in advancing MABL’s mission.

MABL’s mission is to promote and support the professional development of Black judges, lawyers, and law students in Minnesota, and represent the interests of the Black community in the legal profession and in the judicial system throughout the state.

On St. Paul's Hmoob (Hmong) Day, Dan Trudeau co-sponsored a fishing contest at the city’s Lake Phalen Park to build trust among the diverse people who frequent the park.

Wallace Professor of Art Ruthann Godollei is one of six Minnesota artists to receive a 2022 McKnight Visual Artist Fellowship.

Eight new tenure-track faculty members representing a broad range of disciplines will be joining Macalester in the coming months.

The new award was created for the express purpose of celebrating the unique and exemplary work of a member of the Macalester community.