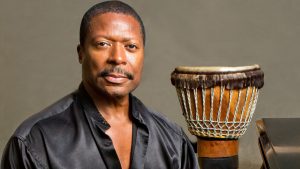 St. Paul, Minn. – Gary D. Hines, Music Director and Producer of the three-time, Grammy Award-Winning Sounds of Blackness and a 1974 Macalester graduate, will be the 2016 commencement speaker at the Macalester College graduation ceremony.

“Since he founded the Sounds of Blackness at Macalester over 40 years ago, Gary Hines has been responsible for making the kind of music that both lifts people up and brings them together,” said President Brian Rosenberg. “We are very proud of his many accomplishments and look forward to having him as our commencement speaker.”

Along with the Sounds of Blackness, Hines has performed in every major city in the U.S. and, abroad in Africa, England, Holland, Switzerland, France, Germany, Italy, Portugal, Japan, Brazil, Mexico, Canada, Bermuda, Jamaica, Martinique and The Bahamas.

Hines has conducted countless music workshops, seminars, lecture-demonstrations and master classes across the United States and internationally about the history, impact and evolution of African American music and culture.

Sounds of Blackness began on Macalester’s campus more than four decades ago. Last year, Turck Formal Lounge was renamed “The Sounds of Blackness Lounge.” At the renaming ceremony, Hines recalled practicing in the lounge at times when the music building was full.

When the Minnesota Museum of American Art’s new exhibition Many Waters: A Minnesota Biennial opens on July 24, it will include work produced by Macalester professors Ruthann Godollei, Megan Vossler, Tia-Simone Gardner, and John Kim.

Sun Tun '22 is the first student in the nation to receive the Society of Vertebrate Paleontology’s (SVP) inaugural Futures Award and the $5,000 summer research stipend and professional mentorship that come with it.

Mac student selected for inaugural economics program at U of Chicago