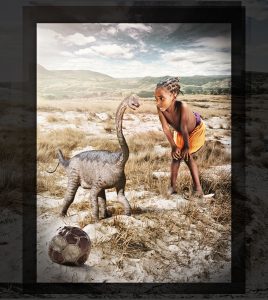 St. Paul, Minn. – Research led by Macalester College Professor Kristi Curry Rogers published in Science sheds the first light on the life of a baby Rapetosaurus, whose 67-million-year-old fossil bones were found in Madagascar. The work was funded by the National Science Foundation.

Long-necked sauropod dinosaurs were some of the biggest animals ever to walk on land, yet they hatched from eggs no bigger than a soccer ball. With a dearth of fossils from the youngest sauropods, the earliest lives of these giants were a mystery.

A beautifully preserved partial skeleton, so small that its bones were originally mistaken for those of a fossil crocodile, allowed Curry Rogers and her colleagues to determine that this little Rapetosaurus was just a few weeks old, 35 cm tall, and weighed about 40 kilograms when it succumbed to drought in its Cretaceous ecosystem.

“When we find sauropod bones, they are usually big,” said Curry Rogers.  “Even juveniles can be bigger than cows. This is our first opportunity to explore the life of a sauropod just after hatching, at the earliest stage of life.”

Along with her colleagues, Macalester alumna and University of Washington graduate student Megan Whitney, Professor Mike D’Emic of Adelphi University, and researcher Brian Bagley of the University of Minnesota, the team studied thin-sections of some bones under a microscope. They also utilized a high-powered micro-CT scanner to get a closer look at the insides of bones. The detailed microscopic features of fossil bones reveal patterns of organization similar to those of living animals, and make it possible for paleontologists to reconstruct the history of life in extinct animals.

“We looked at the preserved patterns of blood supply, growth cartilages at the ends of limb bones, and at bone remodeling,” said Curry Rogers. “These features indicate that Rapetosaurus grew as rapidly as a newborn mammal.”

In addition, these microscopic features and bone proportions support the idea that Rapetosaurus was precocial, meaning that it was mobile from hatching and less reliant on parental care than some other animals.

The scientists were also able to observe microscopic areas deep within the bones, which indicate the time of hatching and allowed them to estimate the size of a newly hatched Rapetosaurus.

“Baby Rapetosauruses were around five pounds when they hatched,” said Curry Rogers. “From there, they were on their own, foraging and making their way – or not – in a pretty tough ecosystem.”

Dr. Eric Carter, Edens Professor of Geography and Global Health, co-wrote a paper about social capital and cohesion during the COVID-19 pandemic in northwest Argentina

Maccolades for Summer 2022: Brainy athletes, a Hollywood adaptation, and more

Maccolades is a monthly round-up of the most recent accolades and accomplishments earned by members of the Macalester community. Below are highlights from Summer 2022.