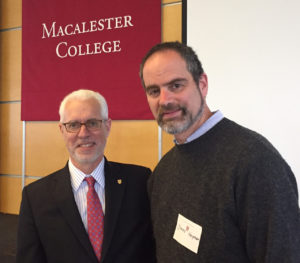 St. Paul, Minn. – Physics Professor James Heyman has been awarded the 2017 Jack and Marty Rossmann Excellence in Teaching Award that recognizes “a faculty member who has been identified by colleagues and students as exemplifying the teaching goals of Macalester College.”

For superb work in front of the classroom and in the lab, inspiring countless students and colleagues, the 2017 Jack and Marty Rossmann Excellence in Teaching Award winner is James Heyman.

As 10 letters from faculty, students, and alumni illustrate, James Heyman simply loves physics. “His enthusiasm for physics never ceases,” writes one alum. “Even at 7 a.m., when my classmates and I were barely present in the world, he found ways to engage us. He would begin Lab Instrumentation lectures with a shout, something like, ‘Transistors!’ while flashing his signature two-thumbs-up-fist-pump move.” His lectures are engaging and inspiring, and over nearly 25 years at Macalester, James has drawn many students into the major by helping them build an intuitive understanding about extraordinarily complex concepts. A colleague calls James one of the best experimental physicists that he’s ever known—and that talent translated into thoughtful, innovative, and effective laboratory exercises. Students and alumni recognize his ability to guide them through an experiment rather than command each step of the process. In one alum’s words, “he somehow managed to be unfailingly helpful while keeping enough distance to let students stumble and learn through their own efforts.”

In his research program, James shines as both a scholar and mentor. He has received 12 research grants and has 55 refereed publications, including 36 articles in archival journals. He collaborates with three or four students every summer and often several more during the academic year, and he has co-published with many students in top physics journals. In these collaborations, James trusts students to follow their own ideas and lets them lead experiments, to help them grow as researchers. Years after they graduate, alumni continue to draw on the lessons they learned in his lab.

Recently James completed a remarkable effort to reinvent and reinvigorate the department’s upper-level courses. Each of those classes, until this year, was taught in a lecture-only model, without any hands-on experiments or applications. Over several years, James transformed the curriculum by developing and implementing advanced lab sections for upper-level courses; he carefully and diligently designed, tested, and executed each new laboratory exercise. This is a herculean task and notable achievement even before considering that he maintained his normal teaching load throughout the process and continued to collaborate with students on research projects and serve on various committees. The result is a far-reaching change in the department that strengthens the major program significantly. “James has created a highly successful new component of our curriculum,” writes department chair Tonnis ter Veldhuis. “It embodies lasting value for generations of students to come, one that leverages Macalester’s outstanding investment in resources in science, and one that teaches students experimental skills that employers value.”

James excels in every aspect of teaching and scholarship. In front of the classroom, he connects with students of all abilities and experience, from first-year students to majors who publish research findings and go on to first-rate graduate programs. He has strengthened Macalester’s physics and astronomy program immeasurably. Professor emeritus Sung Kyu Kim saw James’s talent for teaching when James was a regular guest lecturer in Sung Kyu’s Cosmos class. “His lectures always drew the loudest and longest applause from the students,” he writes. “I think they were happy to be Mac students.”

When the Minnesota Museum of American Art’s new exhibition Many Waters: A Minnesota Biennial opens on July 24, it will include work produced by Macalester professors Ruthann Godollei, Megan Vossler, Tia-Simone Gardner, and John Kim.

Sun Tun '22 is the first student in the nation to receive the Society of Vertebrate Paleontology’s (SVP) inaugural Futures Award and the $5,000 summer research stipend and professional mentorship that come with it.

Mac student selected for inaugural economics program at U of Chicago