“It is exceedingly rare for a first-year student to secure an REU position.”
—Professor John Cannon

Some first-year students might expect their early semesters to be a mundane checking-off of requirements, but that’s not the case at Macalester. Just ask the four first-year astronomy students who were selected for highly sought-after Research Experiences for Undergraduates positions after taking courses with astronomy professor John Cannon.

Student research is an integral part of our majors’ experience,” says Cannon. “These four students were especially interested in getting involved in research at the first possible opportunity, so I created an unusual class in spring 2017 called Research in Astrophysics, an intensive course designed to provide an immersive, hands-on research experience, using observational data from some of the most powerful telescopes in the world.

“It is exceedingly rare for a first-year student to secure an REU position, so for four students from the same class to do so is remarkable.”

Before coming to Mac, Andrew Mizener (Omaha, Neb.) had had no real exposure to astronomy. “I knew I wanted to do something science-y,” he says, “but I wasn’t sure what. I was lucky enough to take Professor Cannon’s first-year course, Exosolar Planets and Astrobiology. The class blew my mind, and I declared a major in astronomy before the end of first semester.” 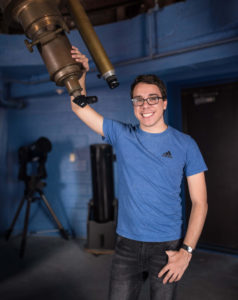 Mizener spent his 10-week REU at Louisiana State University in Baton Rouge. “I performed computer simulations of the nuclear reactions in R Coronae Borealis stars to try to understand why they behave the way they do. They are made of different stuff than most stars and they dim dramatically at unpredictable intervals. They are thought to be the result of a very special type of double white dwarf merger.”

Alyssa Bulatek (Park Ridge, Ill.) conducted research at Wesleyan University in Middletown, Conn., in the Van Vleck Observatory, which, she notes “has a guestbook signed by the likes of Edwin Hubble [of space telescope-related fame].” For her, a typical day sometimes meant writing a program to check the calibration of data from the Atacama Large Millimeter Array, an observatory in the Atacama Desert in Chile. 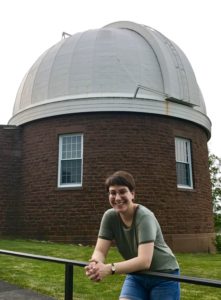 “I didn’t know very much about Python or computer science at all when I started,” says Bulatek. “Now I can parse through pretty dense code without becoming intimidated.

“Astronomy is one of the only fields of science where the scientists study real phenomena that aren’t within our reach (with the exception of meteorites.) That we can know facts about stars and exoplanets within our own Milky Way galaxy—and even information about galaxies many, many light-years away—is astonishing to me.”

The NASA Marshall spaceflight center at the National Space Science and Technology Center in Huntsville, Alabama, was the research site of Riley McGlasson (Eden Prairie, Minn.). Her work focused on solar coronal jets—small eruptions on the surface of the sun. 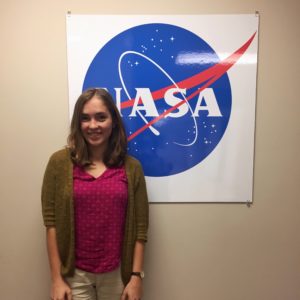 “I spent most of the first part of the summer searching for jet eruptions by looking at images of the sun taken at two-minute intervals and found a total of 60 jets,” says McGlasson. “Then I used IDL (a computing language) to process that data.” Now she is preparing a research poster to present at the American Geophysical Union meeting in New Orleans and planning further research for a paper she hopes to publish.

Lilly Bralts-Kelly (Urbana, Ill.) also worked in solar physics in her research at Montana State University in Bozeman: “My research involved the imaging and analysis of solar flare events in the ultraviolet and hard X-rays. I specifically examined the relationship between spatial and spectral properties of magnetic reconnection in the Sun’s corona.”

Bralts-Kelly was initially nervous about holding her own in a research environment with older, more experienced students, but she found that thanks to her experience in Cannon’s “Research in Astrophysics” course and her drive to learn, she was well prepared. 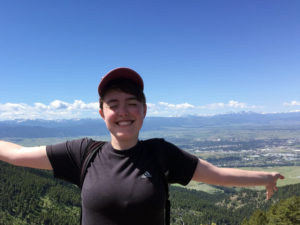 Having REU research experience so early in her college career was of special benefit to Bralts-Kelly. “Conducting research in such a specialized branch of physics has stirred up curiosity about the rest of it. If I can gain a sufficiently varied experience as an undergraduate, I’ll have a much clearer picture of where I’d like to go afterwards.”

Clearly, for all four of these students, that direction is nowhere but up.

Life on Mars and Beyond

Students learn the art of scenic design in this advanced theater course.

Presented annually to graduating seniors who demonstrate a commitment to the ideals and practice of high academic performance, internationalism, multiculturalism, and civic engagement.