“We’re one of the few leading liberal arts colleges in a city,” Andy Overman says. “That, with the college’s emphasis on global thinking, makes ‘Cosmopoleis’ a great introduction to Macalester. It begs questions like, are we in a diverse global city?”

If there’s a single way to win the hearts of 15 sleepy college students, it’s free donuts. On a rainy Tuesday, classics professor Andy Overman greets his first-year course with a variety box from Lunds and Byerlys, taking time at the beginning of class to ask individual students about their weeks, their sports, their other classes—no rush. When the discussion begins in earnest, it feels natural, just an extension of the previous conversation.

The course is “Cosmopoleis: Building Global Diverse Cities,” and today the city up for discussion is Constantinople (called Istanbul, in the modern lexicon). Students remark on the ancient city’s preoccupation with pageantry and spectacle, considering whether or not those qualities persist in cities today.

Overman prompts them to think about it a little differently: “You don’t necessarily need to have gladiators killing each other every Thursday to have a little glamour,” he says.

“Here’s a question,” he continues, “do you think a cosmopolis needs to have some mechanism for maintaining order?” Sitting at the front of the room, he leans back and lets the students bounce ideas off each other.

“No,” one student replies. “Because most cities didn’t have anything but the military.” A pause. “But, then again, Alexandria’s library got sacked because of riots.”

“Like every other control mechanism, it depends on how it’s used: whether it’s a mechanism for stability or for power,” another replies. “What’s the difference between the military and the police?”

In the Macalester tradition, a first-year course (FYC) is a seminar with a 16-student cap that works to ease the transition from high school to college. Course offerings span nearly every department and range from “Music and the Meaning of Life” to “Digital Ethics” to “Politics and Inequality”—just to name a few.

Under the counsel of the FYC professor (who is also a student’s initial academic advisor), students are introduced to Macalester’s campus resources and academic expectations, and build what is often their first point of connection to the Macalester community.

When Rose Ruedisili ’23 (Long Lake, Minn.) first introduced her family to Overman, she says, they described him as a cross between her grandfather and Indiana Jones. Sitting in his classroom, it’s hard to miss the comparison: he nonchalantly quotes ancient texts verbatim, discusses the scholarly discoveries he made over the weekend, pauses to ask students how they feel, what they think. 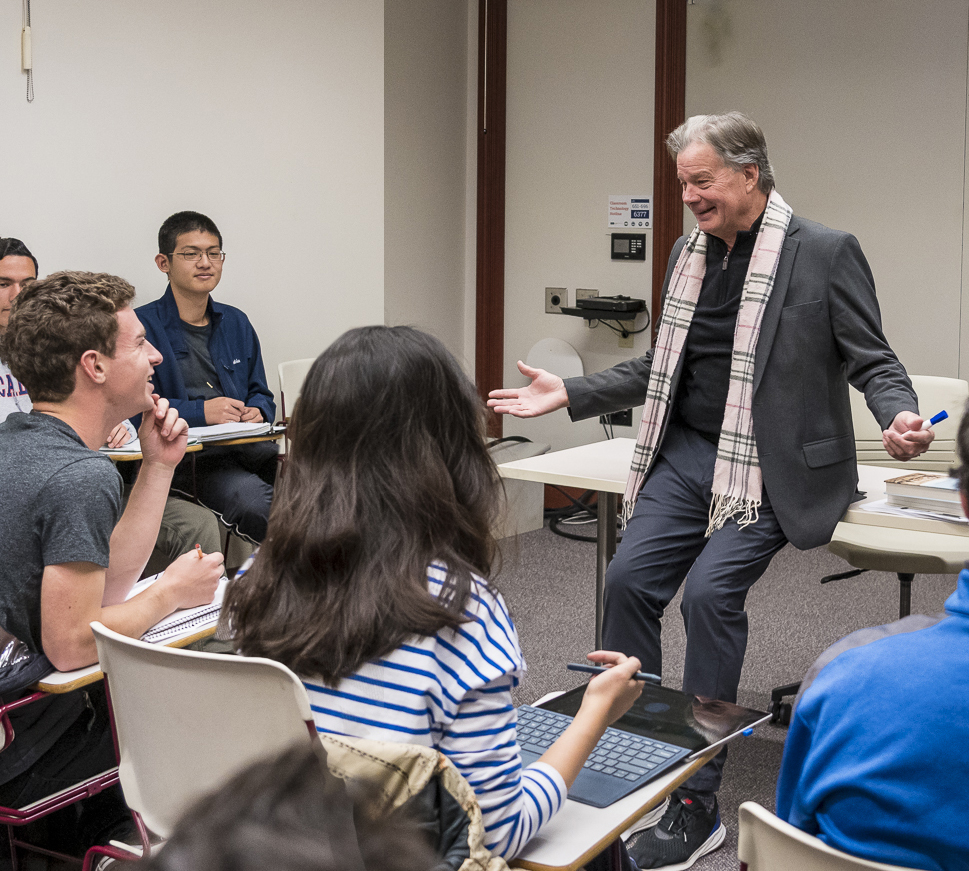 As for the class itself, Overman says that Macalester presents the perfect conditions for its success.

“We’re one of the few leading liberal arts colleges in a city,” Overman says. “That, with the college’s emphasis on global thinking, makes ‘Cosmopoleis’ a great introduction to Macalester. It begs questions like, are we in a diverse global city?”

“I think there are lessons from these ancient cities that we could learn from,” he continues, “diverse and global aren’t just concepts within present paradigms—that’s limiting.”

Next week, the group will leave Constantinople behind to explore Baghdad, another of the six ancient cities that divide the “Cosmopoleis” syllabus. Soon, though, students will be asked to challenge that selection by proposing a seventh city of their choosing. They will have to argue why their chosen city is a cosmopolis and, Overman says, “why Andy should have included it and didn’t.”

Oliver Soglin ’23 (Alameda, Calif.) was originally drawn to the course by this unique perspective on politics and internationalism.

“The big questions that we’re asking are what is a diverse city, what does it mean for a city to be global, and then what do you need to make those cities happen,” Soglin says. “I think that’s just such an interesting question, to look at cities that exist today, while we’re anchored in cities that are very, very old.”

For Ruedisili, who originally enrolled in the course to explore her interests in history and architecture, the course has been instrumental in helping her realize what her path at Macalester might look like. Both she and Soglin agree the class has exceeded their expectations—in terms of content and classroom community.

“Knowing that Andy is a person I can talk to about things, a person that I meet with relatively regularly, has made it a lot easier to figure out what I’m doing so I can focus on things like enjoying myself and learning,” Soglin says. “It’s almost like a safety net. I know I’m not gonna get left behind—there’s a professor and preceptor watching out for me.”