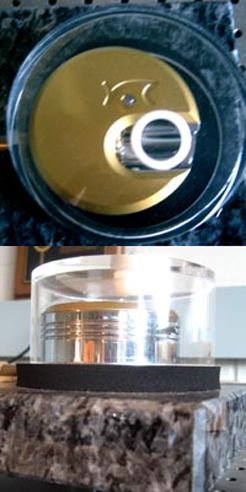 The Scanning Tunneling Microscope (STM) is able to map a sample’s surface at high resolutions without the use of light or electron beams.  Instead, the microscope employs quantum mechanics to generate images.  It uses an ultra fine probe whose tip is as fine as a single atom.  Via the probe, a potential difference is applied between the probe’s tip and the sample’s surface.  The sample’s electrons, in response, then “tunnel” through the potential barrier and thus generate an electric current.  From the combined information of electric current and the distance between the probe tip and sample surface (often mere nanometers), the STM recreates the image of the sample surface, literally, atom by atom.