Ann Hobbie ’88, Monarch Butterflies: Explore the Life Journey of One of the Winged Wonders of the World (Storey Publishing, 2021) 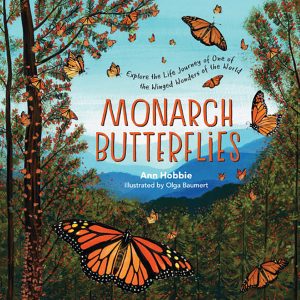 “I came to teach children and teachers about monarch butterflies because of the ease with which they illustrate the magic of the natural world. Eastern monarchs migrate 3,000 miles to overwinter in central Mexico’s mountain forests. Each year’s visitors to these roosting sites are the great, great grandchildren of those who rested there the previous year. And monarchs are fascinating for other reasons: a monarch grows 2,000 times its egg mass by the time it turns into a chrysalis, for example, and they are poisonous to many, but not all, other organisms. Like other lepidoptera, they taste with their feet. And their dramatic life cycle is fun to observe.

Research has revealed that the monarch population has plummeted over the last 20 years from habitat loss, pesticides use, and climate change. In this book, I endeavored to tell the story of this fascinating and threatened species in an accurate, compelling, and beautiful way.”

“Perhaps Hollywood is to blame for raising our expectations, but a few years ago, it seemed as if self-driving cars were going to be here sooner rather than later. In Driven, Business Insider senior editor Alex Davies tells the dramatic, colorful story of the quest to develop driverless cars—and the fierce competition among Google, Uber, and other tech and auto giants in the race to revolutionize our lives.” –Fortune, “21 Books to Look Forward to in 2021”

“In the second century BCE, the Greek historian Polybius (200–118 BCE), after arriving in Rome in 168 BCE, asked in his Histories: ‘How did the Romans succeed in building a world empire in such a short span of time?’ This book takes the perspective that Polybius’s question was mistaken, in the sense that the formation of the Roman Empire took a very long time indeed, centuries. The formation of the Roman Empire began in 390 BCE when the Gauls burned Rome; and even before that time, the kings of Rome were some of the first empire builders.” 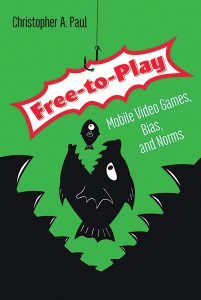 Q: What’s your favorite free-to-play game?
A: “Candy Crush and match-3 variants are classics. I love Supercell games, particularly Clash Royale and Brawl Stars. And Genshin Impact is an absolute revelation in what the free-to-play mobile platform can be. That all said, it’s important to remember that games like League of Legends and World of Tanks are free-to-play, too. Through this book, I got a sharper understanding of how people talk about video games and the underlying presumptions of the gaming community shape the games that are made and the way they are received.”

Q: What advice do you have for writers?
A: “Dig inward, and read outward. Faced up against the daunting task of figuring out what to write and how to write it, it is easy for a certain defensiveness to set in. The tendency is to lock the door and clam up, entrench yourself in your perspective, fear and reject out-of-hand stories that are opposite yours, or worse, close to yours. This is a self-defeating response based on an illusion. There is always room for another book. You have a story to tell. You have a contribution. The challenge is to dig into your experience, your feelings, your instincts, and your insights to extract what is singular. And all the while, to take in those of others. If you can handle the tension, the ideas of others can only enhance, enrich, and clarify your own.”

“I had no idea that a reluctant trip to my reservation during one of the busiest tourist weekends of the year would lead me down this path. My research has taken me from the Great Smoky Mountains to the slowly rolling hills of northeastern Oregon to south central Ohio. I have sat backstage at the Mountainside Theatre in Cherokee, watching the cogs of an aging, albeit well-oiled, drama prepare for a performance. I’ve traveled from Columbus to Chillicothe, watching freeways and the industrial feel of the capital give way to bucolic farmlands and two-lane highways. I’ve walked miles in cowboy boots in Pendleton, watching proud descendants of cowboys, Indians, and pioneers reenact their popularized version of history. Despite their many differences, one constant remains. American Indian historical pageantry and outdoor drama are a lens for the past and the present, the historic and the dramatic. And, in the spirit of the historic and the dramatic, I end with the words of William Shakespeare:

‘All the world’s a stage,
And all the men and women merely players;
They have their exits and their entrances,
And one man in his time plays many parts …
Last scene of all,
That ends this strange eventful history.’”