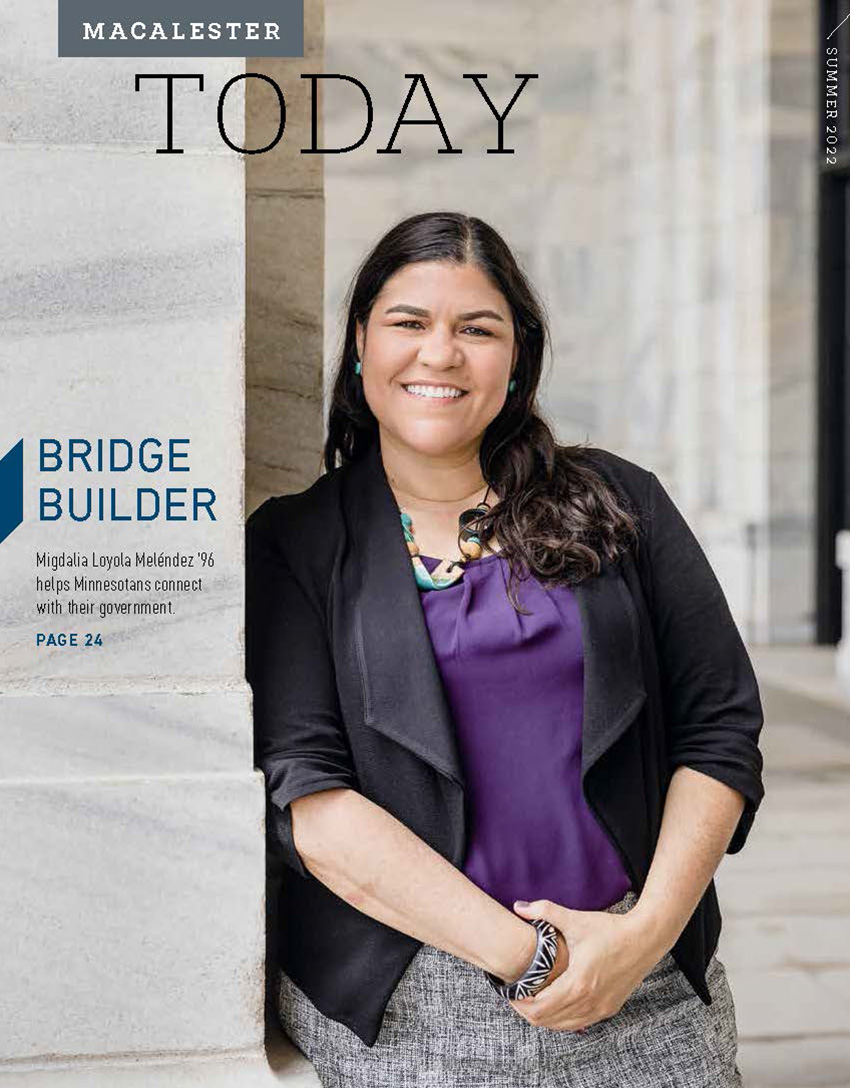 Each year, the college’s Alumni Awards celebrate alumni who exemplify a deep commitment to Macalester’s values. Award recipients are nominated from across the global Mac community, then selected by the Alumni Board. Meet this year’s winners. 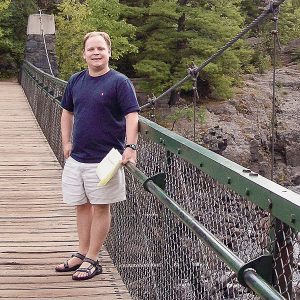 After co-founding Macalester’s mock trial team as a first-year student, Toby Heytens pursued a distinguished law career, including clerking for Justice Ruth Bader Ginsburg, teaching law at the University of Virginia, serving as solicitor general of Virginia, and arguing before the US Supreme Court.

“Macalester’s values of civic commitment and social justice have defined Toby’s career,” writes his nominator. “He defended Virginia’s decision to remove statues of Confederate war figures, a job at which he succeeded.”

In 2021, President Biden nominated Heytens to a seat on the US Court of Appeals for the Fourth Circuit. The Senate confirmed his nomination in November.

“My first job after law school was as a law clerk to a federal court of appeals judge,” Heytens says. “That job changed my life, and I treasure the thought of getting the chance to play a similar role in other people’s lives.”

“Despite never having been a trial lawyer, I have been competing in or coaching trial advocacy competitions for more than half of my life and have learned more from it than any class I ever took or job I ever had.” 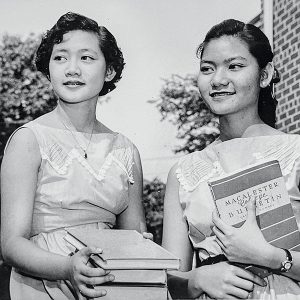 Rosalind Santos Moldwin dreamt of becoming a doctor. “I enjoy working for the good of families and communities,” she says.

After marrying and having three children, she applied for medical school. But the interviewers told Moldwin that her age disqualified her.

Born in the Philippines, Moldwin served as president of Macalester’s Cosmopolitan Club, promoting friendship between US and international students. Her leadership continued to shine at Hartford Seminary and as director of religious education at First Congressional Church in Austin, Minnesota.

“Rosalind has exhibited her Mac values by not letting her race, sex, or age stop her from accomplishing much throughout her life,” her nominator writes. “She has touched many lives for the better.”

“I am grateful for the experiences and learnings that I had at Macalester, from the classroom to the Cosmopolitan Club to the Tartan Troopers.” 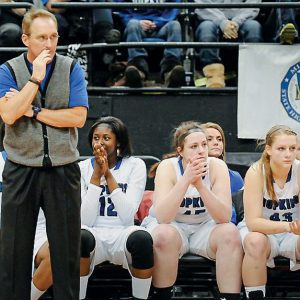 Before each basketball practice, Brian Cosgriff huddled his team together and reminded them to “never become satisfied.” He told them: “Always work to be your best on the court, in the classroom, and in your life.”

Cosgriff models those values, devoting his career to teaching elementary school physical education and coaching high school basketball. Cosgriff built the Hopkins girls basketball program into “one of the most premier high school programs in the country,” writes his nominator, with fifty players continuing on to collegiate, professional, and Olympic basketball. Others became doctors, nurses, lawyers, and military officers.

“I love how my players have gone on to do amazing things in their lives—not only with their careers, but with their families,” Cosgriff says. “Seeing them use the skills and work ethic that they learned through playing basketball brings me joy.”

“I deeply care about each player on my team, not just the best players who play each night. In fact, I have the utmost respect for players who come to practice every day, knowing they might not get to play in the next game.” 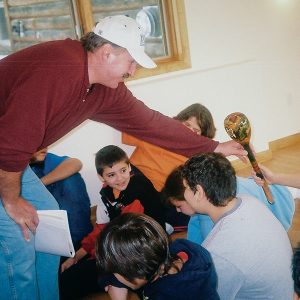 After college, Damian Anthony Vraniak wrote to university faculty nationwide in hopes of helping with some of the top research on parenting.

After earning a doctorate in psychology from Vanderbilt University, Vraniak went on to substantially impact the nurturing of American Indian children and families, from preschool programming to doctoral-level training.

Vraniak’s many accomplishments include designing and directing one of the first gifted programs for American Indian public school students; writing the first $1 million grant to study emotional development in American Indian children, which helped jumpstart a prestigious national mental health center; beginning an annual international gathering of American Indian and Alaska Native psychologists and graduate students, now in its thirty-fifth year; and designing a unique, culturally based environmental education program.

“Damian has invariably served others first,” writes his nominator. “He has worked tirelessly to foster the health and well-being of American Indian and Alaska Native children and their families.”

“My passion and gift is engaging children and families in nature.” 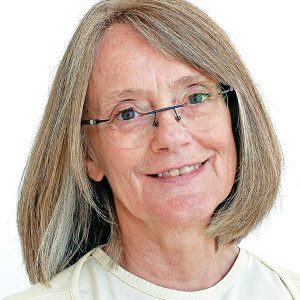 For nearly forty years, Carol Runyan has worked in the public health discipline of injury and violence prevention. She is a professor emeritus at the University of North Carolina, Gillings School of Global Public Health.

After having founded and led the renowned UNC Injury Prevention Center for over two decades, Runyan founded the Program for Injury Prevention, Education and Research at the University of Colorado.

Throughout, Runyan says she has taken great joy in helping students “learn principles of public health and injury prevention as a way to fulfill their dreams of making the world better through both research and practice.”

Her work has proven the life-saving impact of smoke detectors and included core research in home safety and young worker safety, as well as the prevention of violence, suicide, and drug abuse.

“We in public health can’t ever know which specific people we helped,” she says, “but as one school of public health puts it, ‘We save lives, millions at a time.’”

“As part of my teaching, I stress the importance of understanding the history of public health in social context. Too often we assume problems are new and we spend unnecessary effort struggling to find solutions rather than appreciating how the problems evolved and how solutions to similar problems of the past have been approached successfully.” 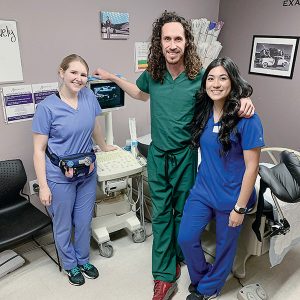 As a family medicine physician in Oakland, California, Dr. Michael Snavely says he experiences a lot of vicarious joy.

“I prescribe hormone therapy and provide gender-affirming care for gender expansive folx, and people get so excited when they start to feel like themselves in their bodies,” he says. “It is hard not to share in that excitement.”

In addition to his work at the Gender Affirming Health Program at University of California, San Francisco, Snavely travels to Texas monthly to provide abortions, and works at Oakland’s La Clínica de La Raza, a health center founded by and for the Latinx community, where he also is a union member and a member of the anti-racism working group.

“I also find joy in community,” he says. “I believe that coming together collectively with others is the answer both to questions of social justice as well as personal happiness.”

“We’re seeing the world in black and white and a little bit of gray right now when it comes to gender, and it’s time that we saw it in living color.” 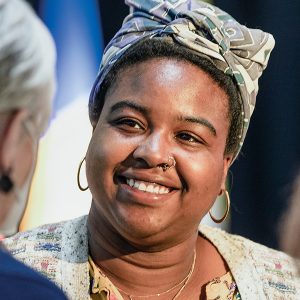 At a museum in Medford, Massachusetts, Kyera Singleton is centering enslaved people’s stories—and connecting their histories to the current movement for racial justice.

Singleton is the executive director of the Royall House and Slave Quarters, the only known freestanding structure where enslaved people lived in the northern United States. During the pandemic, her innovative leadership included creating virtual events to bring the museum to new audiences.

Singleton views her work as “anything but neutral,” writes her nominator. “Her museum asks audiences to reflect deeply on uncomfortable truths, and to question firmly held cultural assumptions.” She emphasizes enslaved people’s humanity and resilience by highlighting acts of resistance and moments of joy and pleasure.

“You have to center Black people as political agents in their own history. We have always fought for our own freedom, and everyone else’s, and continue to do so today.” 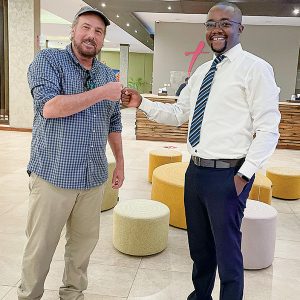 “James Cummings is a fiercely effective advocate for promoting education across borders,” writes his nominator. “He has been a teacher in rural Kenya, a teacher and international bridge builder in the US, and the founder of a critical African educational initiative—using his own resources and creativity.”

Cummings founded Kijana Educational Empowerment Initiative in 2002. The US and Kenya based educational nonprofit has invested in more than thirty schools in Kenya and opened its first independent school, the Kijana Global Innovation School, in 2020.

“My aims with Kijana are not only to assist and build schools in Kenya, but to develop cross-cultural connections and advance American schools and culture,” Cummings says. “While the US is advanced in technology, we have much to learn from older, perhaps more socially advanced cultures. In sharing resources, experiences, and ideas, Kenyans and Americans can together advance human society.”

“We want to improve the world and advance the idea that we ‘all live in the same house,’ as John Lewis said, and we all have contributions to make.” 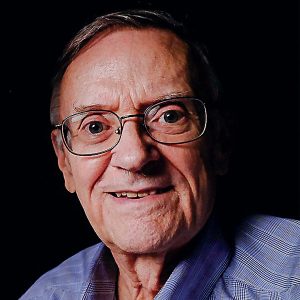 As much as Burke Strickland values his college geography courses, he’s quick to clarify that the sum of his Macalester education was much broader, with many layers added through civic engagement, cultural events, and opportunities around campus.

He applies the same big-picture lens to his dedication to the global Mac community. Over the years, Strickland has fostered connections by planning and hosting regional chapter events in Texas and mentoring students in their academic work and career exploration. Most recently, he inspired a Big Questions program audience with his Macalester story, and facilitated a strategic planning listening session. Beyond his extensive Macalester engagement, Strickland—who concluded his career at The University of Texas MD Anderson Cancer Center—is active in Houston organizations and an avid traveler.

“Burke is a true champion for the college—he is always thinking of ways to connect alumni across generations, with the goal of building a stronger community,” writes his nominator. “He’s an amazing volunteer and ambassador for Macalester.”

“The realization that Macalester core values and dedication to service, internationalism, and social justice carry forward from my contemporaries to more recent grads and current students gives me great hope for the future.”