(November, 2011) At the recent Wolfram Technology Conference in Champaign, Illinois, Stan Wagon of the Mathematics, Statistics and Computer Science Department was one of 10 recipients of the new Wolfram Innovator Award. Professor Wagon has used Mathematica extensively since its introduction in 1990, writing several books and using it to aid in the design of devices such as the square wheel bike in the Science Center. The other recipients were educators from the University of Illinois, Colombia (South America), Carnegie Mellon Univ., Walla Walla Community College, and the Univ. of Houston Law School, as well as researchers from Procter & Gamble, Boeing, and Roche Pharmaceuticals.

(March, 2011) Professor David Bressoud recently testified before the U.S. House Appropriations Subcommittee on Commerce, Justice, Science and Related Agencies on the need for more U.S. students to pursue scientific, mathematical and technological careers. Bressoud is the DeWitt Wallace Professor of Mathematics and past president of the Mathematical Association of America. 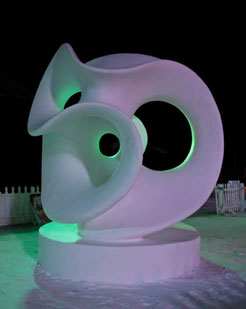 (January, 2011) Professor Stan Wagon was the captain of the Sweden/USA team that participated in the Breckenridge International Snow Sculpture Competition, 2011. Perpetual Motion was designed by Eva Hild, Boras, Sweden (http://www.evahild.com). Without movement there is no life. Evolution, progress, life itself: all require energy and motion. Our sculpture’s boundary represents eternal flow, while the faces represent the pulse of the inner and outer world, as well as the search for new directions.

Karen Saxe, Professor and Chair of MSCS, has been named Editor of the Anneli Lax New Mathematical Library. NML is published by the Mathematics Association of America, and is a series of monographs, written by individual mathematicians, on various mathematical topics meant as supplements for the interested high school or early college student.

(March, 2011) Rayanatou Laouali, a Math student from Niger, has received a $10,000 grant to return this summer to her childhood home to help women there expand their peanut-processing business, allowing them to better provide for and educate their children. Laoali grant article

(January, 2011) Congratulations! A three-student research team including Wanyi Li ’12, advised by mathematics professor Dan Flath, came home from the largest annual mathematics meeting in the world— the 2011 Joint Mathematics Meeting—with an award for their research. The meeting links together members from the American Mathematical Society (AMS) and Mathematical Association of America (MAA) and drew nearly 6,000 mathematicians this year to New Orleans.

As part of an REU (Research Experience for Undergraduates) sponsored by the Institute for Mathematics and its Applications (IMA), the team investigated a theoretical problem suggested by microfluidics, which involves modeling a chemical laboratory the size of a small chip, no bigger than a fingernail. The group’s project, “Elastohydrodynamic Instabilities in Gravity-Driven Flow,” focused on what happens when a tiny viscous layer of fluid flows across the top of a tiny layer of gel and the subsequent effect on its stability. Instability has been observed in lab work, but theoretical analyses have so far been lacking. The team built a theoretical model and explored computer- generated solutions.

REU teams submitted more than 200 posters at the Joint Mathematics Meeting, and Flath’s trio’s work was among 20 posters chosen for the prize. Another Macalester student, Sasha Indarte ’13, presented her research in New Orleans from a different REU program and was also recognized with an award.

The REU program gives students the opportunity to research a topic for five weeks and produce a poster, paper, and presentation at the term’s end. The teams present their progress weekly and enjoy social events and weekly guest lectures on applied math topics.

Flath, with a colleague, organized the first REU at IMA in 2009 and has taught both years. “It is absolutely amazing how much a team of students can learn and accomplish when working together full time on a single project for five weeks,” says Flath. “They come in knowing essentially nothing about the project, but it does not matter. They rise to the occasion.”

(January, 2011) Recent alum David Lopez ’10, wrote about historical details of events leading up to the founding of the Federal Reserve.  His article was published in the Liber8 newsletter, part of the research branch of the Saint Louis Federal Reserve Bank. Lopez article

(December, 2010) Professor Shilad Sen examined WikiLeaks examples in his first-year course on Social Media.  His class project was profiled in an article in the Chronicle of Higher Ed.  Sen Wikileaks article

(July, 2010) Professor Chad Topaz, associate professor in MSCS, has been awarded a three-year, $250,000 grant from the National Science Foundation (NSF) to study biological swarming and chemical pattern formation. The project will provide research experience to 12 Macalester undergraduates who will collaborate with Topaz and with each other. Topaz swarming article

(July, 2010) Professor Shilad Sen, assistant professor inMSCS, has been awarded a four-year, $1.2M grant from the National Science Foundation (NSF) to study tags, or words that people use to describe videos, photographs and web pages online. The grant will lay the groundwork for research collaboration between Macalester College and the University of Minnesota. Macalester’s portion of the grant is about $250,000.  Sen tag grant article

(November, 2010) This year’s NCS contest had 85 teams from 28 colleges in Minn., South and North Dakota, Manitoba, and extreme Western Ontario.

The top five teams and scores were:

Macalester had three other teams and all four finished in the top 20. Only Univ. of Minnesota placed as many in the top 20 (five). St. Olaf had three teams in top 20. Carleton had 2.

Congrats to all participants. Fourth place is excellent, and four in top 20 is also very nice.