As Professor Mary Gwen Owen (Class of 1923) might have put it, the chilly, brutal, twenty-first century Mars Rover truth is that etiquette books are risky endeavors.

They are often relics of their times. At best, a dollhouse window framing a frozen scene of the olden days. At worst, cringeworthy, with passages and so-called rules of behavior (clothed in gloves and hats) that are sexist, racist, classist, and ageist.

Mary Gwen Owen, however, was not deterred. In 1965, she published her own guide to etiquette: MacDo Book or How Not to Be a MacDuffer. According to The Mac Weekly on February 12, 1965, the book was to “be distributed to all faculty and administration members, students, and trustees of the college. It will also be sent to all incoming freshmen during the summer.”

Like Owen herself, MacDo is highly unique and inventive. And unlike other etiquette books, which often promote temperate conformity of behavior, the surprising subtext of Owen’s guide is one of radical self-knowledge and independence. In a chapter devoted to what she calls “Stand-Up-Stand-Around-Ats,” events “such as teas, coffees, brunches, parties, receptions, weddings and garden parties where you will very likely remain standing up while chatting, eating, and sitting,” Owen tells readers, in poetry, how to greet their hosts at such an event: “Give ‘them’ your hand (with its shiny clean glove!/ And your name—just say, “I am me/ (Nothing fancy, you see!)”

“I am me.” Or, as we might tweet it today, “I. Am. Me.” During her 40-year tenure at Macalester, it seems unlikely that Owen would have needed to introduce herself to anyone. By today’s standards, she was glamorous, photographed wearing pearls and stylish red hats. The precise rules for hat wearing, too, are outlined in MacDo: “Your smartest hat for teas, special luncheons, weddings, and parties. No hat for evening affairs, but of course, hats in church!”

By any standards, she was highly accomplished, and dearly beloved. After graduating from Macalester, Owen taught speech and drama at the college for 40 years and founded the Drama Choros, a reading and acting and dancing group of students which toured nationally performing dramatic recitations of pieces such as “Dreams Deferred” by Langston Hughes, and “El Paseo de Buster Keaton”—”Buster Keaton Takes a Walk”—by Federico Garcia Lorca, incorporating movement and sound effects into its performances.

When Owen retired in 1968, she was feted with a campus-wide “Gwenday” celebration in her honor. Her founders’ biography on the college website describes her as “someone who was ahead of her time in many ways” and who “emphasized social justice.” These two latter qualities inform MacDo so that even today, nearly 60 years later, her etiquette guide still offers some timeless lessons.

Be yourself. “It therefore behooves you to cultivate the type of manner and manners you feel project the real you. What type of an individual are you, anyway—unselfconscious, gracious, kind, poised, thoughtful, capable, sophisticated, gay, easy? Or, on the other hand, are you the type of individual who is dour, unapproachable, unhappy, insecure, unpoised, abrupt, ungracious? Which type of individual do you wish to be?”

For example: “What to Say in Notes…Say exactly what you sincerely feel. Make it short, not necessarily a letter. Make it personal. What you liked—what you felt—what was lovely—how you appreciate—how sorry you are. Remember, always use your own words.”

Use poetic, vigorous language with aplomb—and used adjectives unsparingly. Are you “A well-adjusted, poised, eager MacDoer?/ Or a blithering, mumbling, arrogant, ill-informed MacDuffer?”

Be bold and stylish. “Never be afraid to ask what to wear. It is done.”

Say no thank you to skunks and clowns. “Your stationery should complement your personality…Informal note paper is acceptable. Be sure it is plain with no straw-hatted skunks or lugubrious clowns or flourishing gold lettered ‘thank you’s’ decorating the front page.”

Be yourself, part II. “Find your own style and proceed from there.”

Stop saying hi! “Only a MacDuffer would think it enougher/ When meeting and greeting his “elders”!* Just to twang, “hi”/(That raspy old, ghastly old/Nasalized “hi”!)/When “elders” pass by/Give them the full greeting treatment/ The nod of the head, the name, the smile/on the face/But never—not ever—/ No, never/Twang/“HI”! *Elders: defined as “30 or so.”

Reconsider informal party invitations (and beware of mysterious brain watchers). “As a die-hard agitator against seven-digit telephone numbers and the frightening flood of test scores fed into IBM machines by multitudes of Brain Watchers, to haunt the testee to his dying day, We say down with dittoed ‘invitations’! If a party is worth giving, let’s make it so from start to finish. The dittoed ‘invitation’ can’t be an acceptable behavior form—can it?”

Be courteous. “Times, situations, customs may change, but courtesy is always courtesy…”

Find your truth. “Find the universal truth by which you can live. In this jolly Jet Age where time is of the essence, you may only have one moment in which to project the integrity of your Image.” 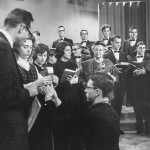 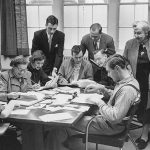 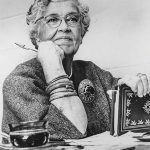 Three alumni recall MacDo‘s influence in college and beyond.

“Growing up in the 1950s, I kept by my bedside a Bible, Emily Post’s Etiquette, and required school readings. Once Macalester became my destination, I added the MacDo book. It became a carefully read reference with specific guidelines for the beginning of my freshman year. The first year I lived on the women-only floor in Dupre Hall. We had an evening curfew hour, we had a room Open Door Policy during male visits, and we were locked onto our floor each night. I do remember visiting with guys below our windows who were still outside after our floor was locked and we women were all ‘safe’ inside.

My, how life changed during those four Macalester years, 1966–1970! As we each came to know ourselves and rely on our inner self to guide our actions, books of behavior were left by the wayside. We had our studies, budding relationships, and the Vietnam War with all the senseless killings as focus. I don’t even know where or exactly when my MacDo book disappeared. The reality of the times took priority and guided our actions.

Yet, as I raised my family a number of years later, I did share some of Mary Gwen Owen’s advice with my children to help guide their decisions and actions. Interesting to think back now, for the MacDo book did have a lasting influence on my life!” –Barb Brodie Erickson ’70

“The summer of 1966 before I started at Mac, I got a packet in the mail that included a summer reading list, which included MacDo, Lord of the Flies, and The Jungle. I’m first-generation, so I follow the rules: I read all three.

I was from a small town and led a very simple life. I hadn’t attended any formal gatherings, and I could count on one hand the number of times I had eaten in a restaurant. There was a lot for me to learn. Mary Gwen wrote about having a little black dress and white gloves. I didn’t have a little black dress, but I bought white gloves. I had a simple sundress that my mother made for me, which I wore to the president’s reception on campus. It was an anniversary celebration of Wallace Hall, which was going to be remodeled, and there was someone from each decade who had lived in Wallace Hall. I went with my white gloves and my little black shoes and dressed the way I was supposed to dress according to Mary Gwen, and I gave my presentation about what life was like in the 1960s in Wallace Hall.

MacDo was very helpful, even in a joking sort of way. Mary Gwen was speaking to me. She was speaking to those of us who hadn’t a clue how we were going to integrate ourselves into this community.” –Jeanne Sumnicht ’70 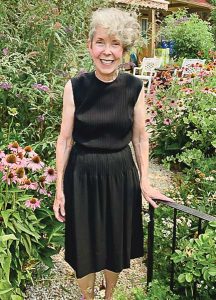 “I thought I still had my MacDo copy, but I must have finally discarded it. But I still have this ‘little black dress,’ which I am pretty sure Ms. Owen pronounced as essential. I long ago disposed of the also-prescribed elbow-length black gloves (though maybe she advised white), which I think I wore exactly once, to the Freshmen Tea with President Harvey Rice. All those ‘dos and don’ts’ now seem quaint and out-of-touch, but they were well intentioned as a help in our transition from gangly high schoolers to college students and citizens of the world.” –Anne Silvers Lee ’69