In 2021, Prof. Aguilar-San Juan received Macalester’s Jack and Marty Rossman Award for Excellence in Teaching. Her courses have included: The Problem of Race in U.S. Social Thought and Policy; Bruce Lee: His Life and Legacy; U.S. Imperialism from the Philippines to Viet Nam; Critical Prison Studies (formerly The School-to-Prison Pipeline); and Hunger Games: Map and Mirror for the 21st Century. She focuses on teaching and learning as forms of embodied and engaged inquiry into self and the world.

As an original team member of Buddhist Justice Reporter, Prof. Aguilar-San Juan co-wrote with Camille Bryant two articles for Tricycle magazine on the “Cause of Death” during the 2021 State v. Chauvin trial. Her scholarly article, “49 days of mourning for George Floyd: An Asian American re-awakening in St. Paul” appears in Amerasia Journal.

Prof. Aguilar-San Juan has traveled numerous times to Vietnam as a guest of the Vietnamese Union of Friendship Organizations. Her co-edited book with Frank Joyce, The People Make the Peace: Lessons from the Vietnam Antiwar Movement (Just World Books 2015) features the People’s Peace Treaty, an innovative student-led response to the war whose seeds were planted in the summer of 1970 during the National Student Congress held at Macalester College.

In June 2019, People Make the Peace was translated into Vietnamese and featured on national television in Vietnam. 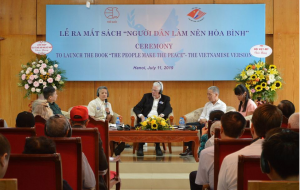 In 2018, Prof. Aguilar-San Juan teamed up with Vietnamese American community advocate Anh-Thu Pham to organize a series of dialogues with Southeast Asian American writers, Vietnam War veterans, and antiwar activists based in the Twin Cities. Three murals, created by Studio Thalo to represent the content of the dialogues, are on permanent display on the first floor of the Humanities building. The dialogues and the murals were funded by a Veterans’ Voices award from the Minnesota Humanities Center.

From 2001-2011, Prof. Aguilar-San Juan brought students to Detroit to participate in the youth-led, grassroots initiative Detroit Summer. Each visit culminated with a meeting in the living room of the legendary philosopher/activist Grace Lee Boggs (1915-2015). Prof. Aguilar-San Juan’s 2015 interview with Grace Lee Boggs was published in Frontiers: A Journal of Women’s Studies.

Before entering graduate school, Karin worked for eleven years in magazine and book publishing for the U.S. left. She was an editor and production manager for Dollars & Sense magazine. Then she joined the South End Press book publishing collective where she had professional encounters with bell hooks, Noam Chomsky, Audre Lorde, Cherrie Moraga, and Margaret Randall. She appears in the 1992 documentary “Manufacturing Consent: Noam Chomsky and the Media” directed by Mark Achbar and Peter Wintonik.

“How do we transform violence into peace?” was the topic of Macalester College’s Big Questions in Washington D.C., October 26, 2021.