“Volunteering with the Peace Corps”

Peace Corps Volunteers assist communities where environmental issues are in conflict with basic needs for farming and income generation. Volunteers become leaders in grassroots efforts to protect and conserve the environment, engaging in projects that establish forest conservation plans, integrate environmental curricula in schools, and promote alternative energy practices. They also collaborate with various organizations to promote environmental awareness activities such as wastewater management, recycling, environmental youth clubs, and park management. A panel of returned volunteers will share stories and images from their service and talk about the impact that Peace Corps had on their host country communities as well as themselves  and their careers.

Sustainability and the environment are increasingly visible themes in American popular culture, with a noted increase in green-focused commercials over the last fifteen years. Women, children, and pristine nature scenes are common images used to encourage shopping for the environment, although Nissan’s “Gas Powered Everything” commercial (2011) and the Colbert Report’s “Prescott Oil Loves the Earth” (2008) use gender and race in unexpected ways. This interactive presentation invites EnviroThursday participants to turn a critical eye on who–and what–receives airtime in environmentally-themed commercials.

Evangeline Heiliger writes and teaches about green and alternative economies, organic coffee, feminist theory, trash, and queer culture. She is the author of “Ado(red), Abhor(red), Disappea(red): Fashioning Race, Poverty and Morality Under Product (Red)™” forthcoming in spring 2012 in Fashion Talks: Undressing the Power of Style, and she appeared in the documentary Janadhaar (2011) as an expert on gender and environmental justice issues in ecotourism. She is currently researching a book project on trash, class, embodiment and queer sustainable economies. She does not own a television.

L. David Mech will speak about the delisting of the gray wolf (Canis lupus) in Minnesota, Wisconsin, and Michigan from the federal Endangered Species List.

L. David Mech is a Senior Scientist with the Biological Resources Division, U.S. Geological Survey and an Adjunct Professor in the Department of Fisheries, Wildlife and Conservation Biology, and Ecology, Evolution and Behavior at the University of Minnesota. He has studied wolves and their prey since 1968, as well as several other species of wildlife.

Automated Transit Networks (ATN, also called Personal Rapid Transit or PRT, aka Podcars) are an emerging transportation technology, transporting passengers completely non-stop along a dedicated right-of-way using very little land and energy.  Electromagnetically powered, these systems can utilize renewable energy sources (solar in particular) and have a tiny footprint.  With carbon levels already much higher than the maximum safe level of 350 ppm, we must develop green transportation now.  A version of ATN has been successfully operating in Morgantown, West Virginia, for more than 35 years, and new systems are up and running in Masdar City, UAE (2010) and at Heathrow Airport in London (2011).  ATN systems are currently under construction in Suncheon Bay, South Korea, and Amritsar, India, and under consideration in many other places throughout the world.  Including the U.S., you ask?

Kjensmo (pronounced “Chens-mo”) Walker has been researching the Podcar industry since 2005 and has been working with the Executive Committee of the Advanced Transit Association (ATRA) since January 2011.  Dependent on public transit for everyday living, Kjensmo realizes the inherent value of public transportation and works to facilitate the implementation of comprehensive, multi-modal, regional transportation networks that support both drivers and nondrivers.  Kjensmo received her B.S. degree in Urban Studies from the University of Minnesota in 2011. 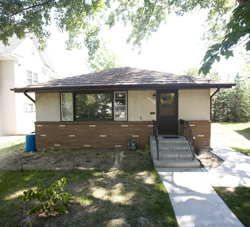 What is the EcoHouse?  Find out about our own Eco-Living/Learning Laboratory.  EcoHouse students will talk about the house and their projects.

If you are interested in living in the EcoHouse for the 2012-2013 school year, please fill out an application.

“The Education of Barack Obama: Race and Politics in the Age of Fracture”
Speaker:  Thomas Sugrue, David Boies Professor of History and Sociology at the University of Pennsylvania

Acclaimed Univ. of Pennsylvania historian Thomas Sugrue will deliver a lecture on race, politics, and society in the 21st Century.

Thomas Sugre is a specialist in 20th century American politics, urban history, civil rights, and race.  He was educated at Columbia; King’s College, Cambridge; and Harvard where he earned his Ph.D. in 1992.

Sponsored by Mellon Curricular Pathways and the Urban Studies Program.

“Putting the Fun Back in Infrastructure:  The Electric System and the Future of Energy”
Speaker:  Maggie Koerth-Baker, Science Editor for the website boingboing.net

Electricity just happens.  Flip a switch, and the lights turn on.  The system is  reliable enough and invisible enough that it’s easy to spend your entire life not knowing how it works, even though you use it every day.  But in an age of limited resources and climate change, ignoring our electric infrastructure is a luxury we can no longer afford.  The good news:  Infrastructure is fascinating.  Maggie Koerth-Baker explains how our flawed and surprisingly precarious electric system evolved, how it controls what we can and can’t do to solve our energy crisis today, and what we can learn about the future of energy by studying its past.

Maggie has a book coming out in March:  Before the Lights Go Out: Conquering the Energy Crisis Before it Conquers Us. She is also a freelance science journalist whose work has appeared in magazines like Discover, Popular Science, and New Scientist, and on websites like Scientific American and National Geographic News.

Climate change and human impacts on Minnesota’s landscape have altered the habitat of wild rice (Zizania palustris; manoomin in Ojibwe; psin in Dakota).  Management and restoration of wild rice can be informed by research that uses sediment cores from the beds of wild rice lakes.  The University of Minnesota is supporting the Fond du Lac Band of Lake Superior Chippewa to trace the historical distribution and growing conditions of manoomin in the reservation’s wild rice lakes, while involving middle school through tribal college students in research projects and internships.

Dr. Amy Myrbo completed a BA in English lit at the University of Minnesota before leaping into the Geology Ph.D. program.  Her research includes the geochemistry and sedimentology of lakes.  She is also part of the Minnesota Pollution Control Agency’s project evaluating the sulfate water-quality standard to protect wild rice waters.

Established in 1945, White Sands Missile Range, New Mexico, is the largest overland military reserve in the Western Hemisphere. It was the site of the first nuclear weapons explosion and then became a key location for U.S. military missile and ordnance testing. It was also the birthplace of the American space program and an origin of government sponsered ecosystem science.

Yet the presence of White Sands did not go uncontested during the Cold War. Ranchers, environmentalists, wildlife biologists, ecologists, state game and fish personnel, state and federal political figures, and even tourists transformed White Sands Missile Range into a place of competing geographies etched not only from the far-reaching intellectual, economic, and environmental changes wrought by the Cold War, but also from regional history and traditions. In turn the national security officials charged with overseeing the missile range were forced to amend the range’s primary mission as a weapons testing facility as they wrestled with the political and environmental transformation of the American West after World War II.

In Fall of 2008, Macalester’s Sustainability Student Network was formed to foster collaboration among sustainability-focused student workers. By bringing together student workers from facilities, purchasing, Bon Appetit, ITS, the library, and the sustainability office, the Network encourages problem solving across departments and inspires new and exciting initiatives.

For the first time in history, a major characteristic of the 21st century will be the interplay of an increasing number of global threats which the world currently has neither the leadership nor institutional capacity to deal with at national and international levels.  Less familiar to the public than threats associated with global warming and nuclear power are poverty; economics, political and religious fundamentalism; increasing global consumption; urbanization; and environmental degradation.  Such threats will be analyzed with special emphasis on poverty, fundamentalism, and environmental degradation.

As a development anthropologist, Thayer Scudder has done research and consulting over a 55-year period in Africa, Asia, the Middle East and North America working on socioeconomic issues dealing with poverty, large-scale development projects (dams and irrigation, in particular), and forced community relocation.  He is the author of The Future of Large Dams and Global Threats, Global Futures: Living with Declining Living Standards.

This presentation talks about the existence of a clean energy action pyramid for a set of 38 identified energy-saver actions that differ in their cost intensity.  Using logistic regressions, Rose formed this pyramid with data from the 2009 Residential Energy Consumption Survey and confirmed it with an empirical study.  The results support the structure of the pyramid and suggests that individuals are systematic in their efforts to conserve energy.  Several sub-groups of energy efficiency actions are also identified. Finally, her resulting pyramid appears to differ from the “ideal” proposed by organizations invested in reducing energy consumption.  These differences have important implications for outreach and education strategies.

In 2007, President Brian Rosenberg signed the Presidents’ Climate Commitment, promising that Macalester College would achieve complete carbon neutrality by the year 2025. Though valiant efforts have been made to map our attack on carbon emissions, we are still falling short: our current action plan relies heavily on questionable carbon offsets and unfeasible alternative fuel sources, and likely overestimates the impact of small-scale sustainability initiatives.

In recognition of the shortcomings of our current plan, the Environmental Studies Senior Seminar of Spring 2012 went back to square one to reimagine how neutrality could be achieved at Macalester. Through intensive research into the current state of green technology, meetings with leaders in renewable energy development, and collaborative brainstorming about our options as a small, urban institution, the group revised the action plan to better fit Macalester’s options and values.