Remote sensing (RS) is the science of acquiring information about the Earth’s surface without actual contact with the object or area being analyzed. RS is increasingly utilized and relied upon to solve complex physical, biological and social issues affecting our interconnected world. Most biophysical applications of remote sensing use instruments carried on satellites. RS at Macalester focuses on the interpretation and application of data from space-borne imaging systems (eg: Landsat OLI, Landsat ETM, Quickbird, MODIS, AVHRR and SPOT).

The Geography Department currently offers an introductory course and an advanced course in Remote Sensing (RS). The computer labs in Carnegie 108 and 109 are equipped with the software Erdas Imagine, which is used for intro level courses. Students who are interested in working on independent project using Erdas Imagine should contact the Geography Department for permission to use the teaching labs. No other computers on campus are equipped with the software.

Interested in more information? Take a look at the course descriptions! 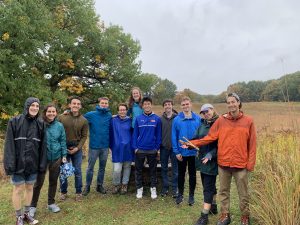 One of the most important aspects of RS at Macalester is to have students conduct independent research of their own interest. A selected number of research projects conducted by students as part of the class or independently are detailed below:

Freeway Capping and the Urban Heat Island Effect: A Study of Boston’s Fitzgerald Kennedy Greenway by Tenley Smith
Tenley studied changes in heat island effect in Boston between 1997 and 2010 related to the construction of the Kennedy Greenway using Landsat thermal data. Results suggest a reduction in temperature between 1997 and 2010. This project contributes to understanding temperature dynamics in urban landscapes.

Modelling patterns of vegetation change in eastern Finnmark, Norway, by Henry Beimers
Henry studied changes in forest cover in Finnmark, Norway, using Landsat data. He found that forest land cover type expanded northward between 1985 and 2019. This project helps to show impacts to the low Arctic due to climate change.

Greenland’s growing glacier? by Maggie Jaenicke
Maggie investigated the reportedly growing Jakobshavn Glacier in Greenland, which has been on a trend of thickening since 2016, using Landsat data. She found ice increase between 2013 and 2019 but an overall decrease trend since 1990. This research helps to understand glacier trends in a warming Arctic.

Urban Greening in Paris, by Julia Evelyn
Julia studied changes in greenspace in Paris from 2010-2019, using Landsat 7 and 8 data. She found that there was an increase in greenness of the city after 2014, when there was a change in the city’s governance and climate policy. This project helps to understand how policy promises correspond with actual greening in Paris.