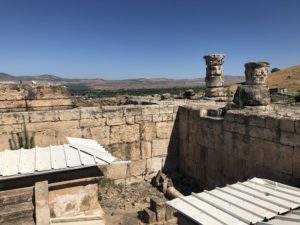 View at Omrit. The tin roofs protect against the weather. (Photo by Lanae Caldwell.)
Download 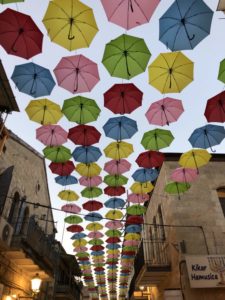 “Every bucket of soil has new knowledge in it that we didn’t know until now.”
—Professor Andy Overman

“Archaeology is not a fast-moving field,” says Lanae Caldwell ’22 (Long Beach, Calif.) “For example, there was a day in the site when I spent 4 to 5 hours stripping a single part of the wall. It’s tedious. It’s very hard, detail-oriented work. But the stuff you are working with is incredibly old, incredibly delicate—you can’t go fast with it. And it’s incredibly satisfying. You take a photo before you start, and then you take another one at the end of the day to track your progress.”

Last June, Caldwell and nine other Macalester students spent 16 days conducting archaeological excavations and conservation at Horvat Omrit field school, Macalester’s site in northern Israel. Professor J. Andrew Overman and Professor Nanette Goldman of the Classical Mediterranean and Middle East Department, have led trips to the field school for nearly 20 years. “The main goal for the last few years has been the conservation work,” says Overman. “The excavations have slowed, which is the rhythm of archaeological excavation.”

With temperatures reaching 100 degrees and high humidity, most days on the site began at 7 a.m., and ended around 1 p.m. “Part of archaeology is to preserve the site as best you can,” says Caldwell. “There is always some destruction that’s happened, but we try and mitigate that.” She and other students were trained to remove salt and lichen from walls to preserve paintings, pull weeds that loosen the site’s foundation, and conserve architectural elements using ancient techniques.

The group also toured the country, visiting museums and other important archaeological sites in Israel, and had a home-cooked meal in a family’s home in Majdal Shams, a Druze city near the border of Israel and Syria. Caldwell, who arrived in Jerusalem a day before the trip began, used that time to meet up with Mac alum Michael Kreher ’16, who gave her a private walking tour of the Old City. She says that throughout her trip putting faces to “real people living their lives” in the heart of conflict areas was eye-opening.

While many of the Omrit students are, like Caldwell, Classical Mediterranean and Middle East Department majors, students have come from all different disciplines at Macalester. “It’s educational in terms of your intellect, but also your emotional intelligence to go somewhere else that’s not your place, and to get your hands dirty and your boots muddy in someone else’s environment and culture,” says Overman. “To learn how to live there and befriend that community requires all your skills to try and understand what’s around you, and what happened in the past. Every bucket of soil has new knowledge in it that we didn’t know until now.”

Class in the Cities

We talked to four professors who incorporated off-campus learning in the Twin Cities into their curriculum this fall.