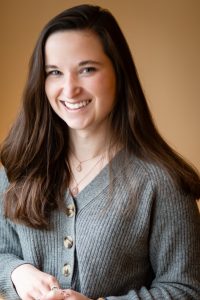 Betsy Barthelemy, a senior from Evanston, IL, has earned the impressive title of being the sole English major undertaking an honors project this school year!

In what will ultimately be a research paper of roughly eighty to a hundred pages, Betsy plans to examine representations of girlhood in Victorian children’s fiction and fantasy literature. After attending an informational session about honors projects in the fall of her junior year, she discussed ideas with several different English professors, until she eventually decided on a topic with the help of her advisor, department chair Andrea Kaston Tange, with whom she had taken a 19th Century British Lit class.

Betsy said the long-form nature of an honors—along with the opportunity to design her own project—appealed to her, which is mainly why she opted not to do a capstone instead. She submitted her proposal last May, and is now in full swing, working towards an April deadline.

Betsy chose six books to ground her studies: Speaking Likenesses by Christina Rossetti, Alice in Wonderland by Lewis Carroll, The Princess and the Goblin by George MacDonald, The Secret Garden by Frances Hodgson Burnett, Mrs. Overtheway’s Remembrances by Juliana Ewing, and The Story of the Treasure Seekers by E. Nesbit. These were all written between the 1860s and the first decade of the 1900s, an era known in Britain as the golden age of children’s literature. Each novel centers around female heroines in the age range of seven to twelve, and most—aside from Carroll and MacDonald—are authored by women.

She’s already written her essay’s first chapter, which focuses on the historical context surrounding the books, the recurring absence of mothers, the publishing industry, and female authorship. Betsy’s other two chapters will compare the genres of fantasy and fiction, exploring the definition of a “fairy tale” and how it fits into the fantasy realm. She explained that fantastical settings in these novels often serve as a vehicle for young girls to engage in more interesting (and possibly subversive) activities than they would normally, due to the constraints of the time period.

Betsy’s also an Anthropology minor, and she said that even though she’s not bringing specific works of anthropology into her project, a lot of the texts she’s read in previous classes have informed her research, particularly regarding the psychology of authors and characters.

Later this spring, Betsy will turn in her final draft to a committee of faculty members. After they read her paper, she’ll give a presentation of her findings, during which the committee will either award her the honors distinction, award it to her on the condition that she make revisions, or not award it to her. Betsy’s committee is made up of Kaston Tange, English professor Amy Elkins, and Classics professor Beth Severy-Hoven.

Betsy spoke highly of Kaston Tange, who she mentioned has been incredibly helpful in such a challenging year. “Nothing would be done, if not for Andrea,” she said. Because Betsy first chose to do an honors last winter, before classes went remote, she was unaware that she would be completing the bulk of the project during a senior year that is not only virtual, but also structured by an unfamiliar module system. She’s been working on her honors steadily since August, but she only took one class in module two (she will do the same for module four), to allow extra time for research.

Betsy said that she’s found the pace of the modules overwhelming, especially because she has a part time job, but she mentioned that it was much easier to settle into a writing flow once she managed to get her initial words on the page. “Get yourself to start, even if you delete the first three pages of something you write, because the hardest part is starting,” she told us, when asked about her advice to students who may want to endeavor on their own honors project in the future.

Here at The Words we wish Betsy the best of luck, and we thank her for taking the time to talk to us!