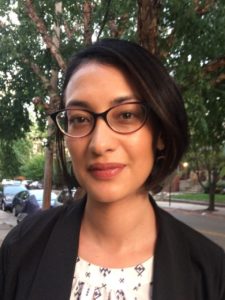 The English Department is overjoyed to announce that Sierra Lomuto will be joining our faculty as a Consortium for Faculty Diversity (CFD) Postdoctoral Fellow of English this coming Fall 2018, and will become an Assistant Professor in 2020. Professor Lomuto focuses on medieval literature and takes a specific look at the development of race and orientalism from pre-colonial times.

Currently a doctoral candidate in the English Department at the University of Pennsylvania, Professor Lomuto has a BA in English/Creative Writing and Women’s, Gender, and Sexuality Studies, as well as an MA in English Literature, both from Mills College. Now a medievalist, Professor Lomuto is a founding member of the group Medievalists of Color (MoC), an “international professional organization that advocates for the advancement of racial minority scholars working in Medieval Studies.” After a wonderful campus visit, we are beyond excited to welcome Professor Lomuto into the Macalester community.

traces the relation between two competing discourses of Mongol representation—the Christian savior and the ferocious monster—in various medieval texts, from thirteenth-century Latin crusade documents, chronicles, and travel narratives to fourteenth-century Middle English romances. Her analysis demonstrates how these discourses were together constitutive of the ideological narrative that racially constructed Mongols as “exotic allies,” a term this project coins to describe their particular relation of alterity to Latin Christendom, one characterized by admiration, fear, desire, and control.

At her Job Talk during her campus visit this February, Professor Lomuto discussed the racialization of geography in The Book of John Mandeville, a fascinating talk that truly expanded the way I think about medieval literature, and offered me, an Arab student who has never really felt comfortable in medieval studies, a way into the field that I had never seen before.

While it may seem that medieval literature and current-day politics are separate beasts, Professor Lomuto reveals how the two are inextricably linked in an article she penned following the 2016 presidential election. In an interesting critique of the emergence of white nationalism into public view, she wrote a guest post for In the Middle, a Medieval Studies group blog, titled “White Nationalism and the Ethics of Medieval Studies.” In her post, Professor Lomuto references the white nationalist National Policy Institute’s annual conference, “Become Who We Are,” which took place at the same time as a conference she attended on medieval manuscripts. Professor Lomuto reveals that she saw subtle similarities between the conference she attended on medieval manuscripts and the concepts present at “Become Who We Are,” brought most prominently to her attention through some presentations at the medieval manuscript conference. For example, a tattoo artist showcased their work, but their Celtic designs have been used by white nationalists as a way to celebrate their heritage in a conflation of Celtic and Anglo-Saxon iconography. Another presenter at the conference created a strategy card game, which categorized the Middle Ages as a white space, an inaccurate representation that lays breeding ground for “white nationalists [to] turn to the Middle Ages to find a heritage for whiteness—to seek validation for their claims of white supremacy.” Professor Lomuto urges her colleagues in Medieval Studies to recognize their “ethical responsibility to ensure that the knowledge we create and disseminate about the medieval past is not weaponized against people of color and marginalized communities in our own contemporary world,” and ends her post by identifying the classroom as the place to ensure that potential white nationalists “will not leave better equipped and more justified to spread his white supremacist hate” and that white students “will leave our classes having at least learned that race is not something they can ignore because we—their professors whom they look up to and respect—both affirm its existence and the need to study it with care.”

Professor Lomuto’s post is vital to an understanding of white nationalism and what academia’s role in today’s political climate might look like, and is a testament to her strong value of scholarship and teaching. Although I generally refrain from reading the comments sections on the internet, I found even more in the comments to excite me about welcoming her to our English faculty. Professor Lomuto responded to all the questions on her post, and even some comments, with long, detailed, and well-crafted answers. In one case, when a reader asked for clarification on an idea, and then brought in an external yet related concept, Professor Lomuto maintained a back-and-forth response to work with the reader, featuring equal parts academic excellence and honest openness. This strikes me as the marker of a great teacher, someone who is so clearly dedicated to her field, the pursuit of knowledge, and helping others expand their scholarship.

I, personally, am ecstatic that Professor Lomuto will become a part of Macalester’s English faculty next fall. Her values, interests, and outstanding curiosity fit perfectly with the intrigue of students at Macalester. On behalf of The Words and the English Department, welcome Professor Lomuto!