“This is my first time writing to you for a book. Thank you for helping us remain connected to the outside world,” reads one letter, dated June 3, 2019. Another, from July 18, announces “my birthday is tomorrow, and I just want to say that hearing about APBP has made it a million times better.”

APBP — the Appalachian Prison Book Project — is no stranger to such enthusiastic responses, and this nonprofit organization based in Morgantown, West Virginia certainly deserves them. Since its founding in 2004 by West Virginia University Professor Katy Ryan, APBP has mailed over 30,000 free books to incarcerated people, led book clubs in men’s and women’s prisons, and has launched a new initiative to bring for-credit college courses into regional prisons. Serving six Appalachian states (West Virginia, Virginia, Tennessee, Kentucky, Ohio, and Maryland), APBP has given hundreds of inmates access to quality reading materials they otherwise would not have.

My involvement with the group was brought about by a chance conversation with a friend from high school. Fresh out of my first year at Macalester, during which I was fortunate enough to get involved with the Civic Engagement Center through Lives of Commitment, I was desperately searching for ways to continue nonprofit work in my home state of West Virginia. When met with an apparent lack of community organizations of any kind, I vented my frustration to my friend, who happened to be a West Virginia University student and had heard of APBP. Although she mangled the acronym (she insisted there was a V in there somewhere), a quick Google search led me to the most eye-opening and impactful summer of my life. 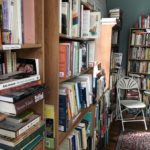 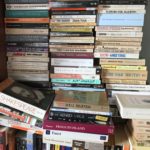 As a new volunteer, I was tasked with opening request letters we received from inmates and matching them with books from our shelves. Though we relied exclusively on donations from community members, we had amassed an impressive library containing everything from old classics to sci-fi/Western hybrids. We were often able to perfectly match up requests with books on hand, but as good as these small victories felt, the letters we got painted a grim bigger picture of our criminal justice system.

Reading firsthand accounts from those “on the inside” prompted me to broaden my own conceptions of social justice and reconsider how we can all leverage our privileges to resist the growing mass incarceration epidemic — which disproportionately affects people of color and those from low-income backgrounds — in ways big and small. As an English major and lifelong lover of books, I’m well aware of how the right to read widely and freely can be, quite literally, life-changing, and as I reflect on my time with the Appalachian Prison Book Project, I’m proud to say that I played some part in sharing that with others.