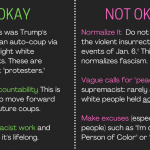 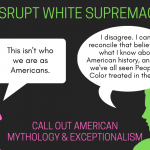 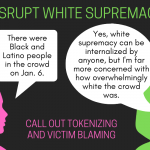 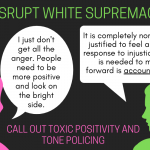 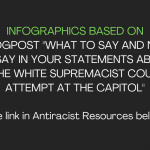 Mobilize Mac is the umbrella framing that the Civic Engagement Center and Macalester College uses for democratic engagement and elections-related work throughout the year via campus-wide collaboration across many different departments and offices. Although programming usually wraps up following Election Day, we made a strategic decision among the staff, faculty, and students involved to continue the effort due to the profound attacks on the U.S. democracy.

This page includes background on Mobilize Mac and important and relevant resources for understanding and engaging the post-election context.

Prior to the U.S. General Election, some members of the Mac community took advantage of Choose Democracy’s toolkit to prepare in how to prevent and, if necessary, stop an undemocratic power grab or coup. The training and work involves psychological preparation, lessons from history (both in the U.S. and abroad), and strategic sensibility. Visit their webpage to see their latest updates and sign up for their emails.

This afternoon, a rally of Trump supporters — after being whipped up by Trump, repeating myths of a stolen election — stormed the Capitol building and stopped the electoral vote certification. Yes, it’s an attempted coup.

Let’s take a moment to acknowledge the emotional weight of this moment. This is awful and another line crossed by Trump’s behavior. He called for the protest, spoke at it, and told his supporters to march to the Capitol. It is outrageous — broken windows, shots fired, explosive devices planted, 13 arrested with weapons confiscated inside the Capitol and one person shot under unclear circumstances. As members of the public, we’re feeling angry and disheartened.

We always said a coup needs legitimacy to be successful. If the goal of today’s seizure of the Capitol was to gain legitimacy, the action has backfired spectacularly.

The pillars of our democratic society are largely standing and supporting our democracy. This coup is not gaining traction or convincing the majority of lawmakers, particularly those required to certify election results. Police have successfully regained control of the Capitol (though questions will need to be answered about their taking selfies with occupiers inside the Capitol and the obvious disparate treatment of black protestors previously and the armed white protestors who just invaded the Capitol).

And it’s not playing well in the public arena. In fact, the seizing of the Capitol is being decried widely by the right (some calling it domestic terrorism) — and even by politicians who supported stymying the election. This is a fluid situation.

Some other happenings of note:

You can be sure we are monitoring this situation. We are in discussion with allies around what development might call for a national mobilization. But strategically we think this is a last gasp and the risks are huge if we simply tell people to rush into the streets.

At this moment, we are not calling for mass protest. We think one of the most dangerous cocktails would be violent clashes between civilians. Tonight, we encourage people in the DC area to honor the curfew and stay home. Everyone at the Capitol should go home.

This violent coup attempt appears to be backfiring on its perpetrators, and they seem to be losing both in the electoral process and in the sphere of public opinion. They look out of control.

Tonight, the most effective action is to let the coup plotters expose how isolated and unsupported they are. Their actions are doing that.

We think it is strategic to get on with certification and finish it. Contact your Representatives to urge them to certify the results of the election ASAP. It’s time to end this.

We are keeping a close eye to see if things change course. Some indications we’re looking for are leaders of societal pillars — other than politicians or the Stop the Steal protestors — encouraging taking to the streets to support the coup OR, people successfully occupying the Capitol building and again delaying the vote certification.

Violence could escalate overnight, so it may be helpful to mentally prepare for that possibility. We think that behavior would only further isolate and discredit their effort to overturn the election.

We don’t believe this coup attempt has the support necessary to overturn the election result. We believe we will see a democratic — if not peaceful — transfer of power on the 20th. And we return to the collective feeling: this is bad. This President’s lies, urges to violence, and support of a coup attempt have done damage to our democracy that will take all of us to heal.

Like many of you, I watched in horror this afternoon as our federal government was attacked. It was a frightening spectacle the likes of which I never imagined we would see in the U.S. Despite the many ways our country sometimes falls short of its ideals, until today I believed that the tradition of a peaceful transfer of power was a reliable feature of our democracy.

I have said publicly that peaceful protest is patriotic. That is not what happened today. The images of armed domestic terrorists storming the Capitol, threatening our elected officials as Senators and Representatives from across the political spectrum attempted to certify the election results, were both chilling and shameful.

In an academic year that has brought us so much fear, loss, and grief, our hearts are broken again. Many of you worked very hard to assure a free and fair election in November. Indeed, we all should be proud of Macalester’s role in promoting voter registration and access to the polls. The violence we witnessed today was an unacceptable assault on our system of legitimate self-governance.

People of conscience must not stay silent when the very fabric of our society is being unraveled. When something is wrong, we need to say so. What happened today is wrong, it is inconsistent with our values, and it is a threat to our freedom.

Since arriving at Macalester in June, I have strived to lead us with honesty and with optimism. I can easily share the truth that I don’t know what the next few days will bring and that is deeply upsetting. It is more difficult to muster optimism in this discouraging moment. But I will close this message by expressing hope and gratitude.

I hope you all are safe. I hope this violence in Washington ends quickly. I hope that our country will swiftly return to the customary procedures for transferring power to a new President and Vice President without further violence. And I am grateful to each one of you, who do so much to support one another through difficult challenges, and who live Mac’s values every day.

We must name that this has been, increasingly throughout and well before 2016, an incredibly traumatic time, particularly for BIPOC. We all — especially those of us who identify as white — must do our part to dismantle white supremacy and continue or embark on the lifelong work of dismantling that which lives in ourselves. Here is a snapshot of the resources available. See more at our Resources & Ways to Help page:

Timely Articles & Resources
Taking Care of Yourself During this Time

We all have a duty to name and acknowledge the intense circumstances under which we are living: Covid-19, unchecked white supremacy leading to rampant anti-BIPOC violence and murder, urgent threats to our natural environment, uprisings / civil unrest, and now a recent attempted coup. We must also name that trauma, violence, racism, and exploitation are foundational principles of the U.S., so for many people, none of this is new.

It is normal to be experiencing feelings of intense anger, anxiety, fear, rage, numbness, difficulty falling asleep, difficulty concentrating, ambiguous grief, or other reactions. For helpful resources, check out the Care, Calm, and Movement page from Student Affairs as well as the Hamre Center Counseling Services Drop-in Schedule Spring 2021 (Mod 3&4).

Key Dates
Mac in the News

Fear Spreads in Minnesota Town as ‘Extremist Group’ Moves to Open Church Victoria Guillemard ’18 was interviewed for this article in The New York Times for her work in forming the Murdock Area Alliance Against Hate to organize against the white supremacist hate group that opened a church in Murdock.

Over 50 liberal arts colleges team up to fight systemic racism on campus by EducationDive, November 14, 2020

The U.S. Presidential Election, also known as the General Election, is held every 4 years. In addition to the President, as much as a third of the U.S. Senate is also on the ballot in the General Election. Midterm Elections (named so because they occur halfway through a President’s term) are held every 2 years, and determine the makeup of the U.S. House of Representatives since all 435 seats are on the ballot each Midterm Election.

While the U.S. Constitution specifies the right to hold elections, the  method and location are left to the states with Congress having the power to alter their regulations. This is why the process varies from state to state.

Initially granted solely to white, property-owning men, the right to vote now belongs to every U.S. Citizen when they turn 18 if they can meet certain residency requirements (one can still be homeless and meet this requirement). In nearly every state, residents can register to vote if they will be 18 years of age on or before Election Day.

Although the popular vote for the General Election is held the first Tuesday of each November,  the Electoral College is the formal body that elects the President and Vice President. Prior to 2000, there were already 7 General Elections in which one faithless elector helped elect a president that had not won the popular vote. A blank ballot was cast in 2000, resulting in the controversial re-election of George W. Bush. In 2016, 7 electors broke with their state on the presidential ballot and six did so on the vice presidential ballot.

A sincere and heartfelt thank you to everyone who participated in the democratic process of the 2020 Election! From organizing and planning as part of the Mobilize Mac effort, to phone banking and letter writing, to marching to ensure each vote be counted, to personally voting, so many members of our community contributed countless hours to ensuring the 2020 Election was engaged, fair, transparent, and safe.

A special thank you to our partners across campus who participated in the Mobilize Mac effort, which began last Spring. Collectively, this working group planned more than 20 different events or programs to take place before, during, and after Election Day!