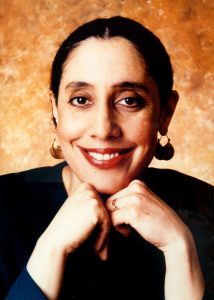 Named in 1998 to a tenured professorship at Harvard Law School, the first woman of color so appointed, Lani Guinier’s distinguished career has included leadership of the voting rights project at the NAACP Legal Defense Fund and public service in the Civil Rights Division of the U.S. Department of Justice.

Guinier received public attention when she was nominated by President Bill Clinton in 1993 to be Assistant Attorney General for Civil Rights, only to have her name withdrawn without a confirmation hearing. Guinier turned that incident into a powerful personal and political memoir, Lift Every Voice: Turning a Civil Rights Setback into a New Vision of Social Justice.

Guinier has published many scholarly articles and books, including The Tyranny of the Majority (1994); Becoming Gentlemen: Women, Law School and Institutional Change (1997) (with co-authors Michelle Fine and Jane Balin); Who’s Qualified?: A New Democracy Forum on Creating Equal Opportunity in School and Jobs (2001) (with Susan Sturm); and The Miner’s Canary: Enlisting Race, Resisting Power, Transforming Democracy (2002) (co-authored with Gerald Torres). In her scholarly writings and in op-ed pieces, she has addressed issues of race, gender, and democratic decision-making, and sought new ways of approaching questions like affirmative action while calling for candid public discourse on these topics.

Guinier’s leadership on these important issues has been recognized with many awards, including the Champion of Democracy Award from the National Women’s Political Caucus; the Margaret Brent Women Lawyers of Achievement Award from the ABA (American Bar Association) Commission on Women in the Profession; and the Rosa Parks Award from the American Association of Affirmative Action, and by ten honorary degrees, including those from Smith College, Spelman College, Swarthmore College and the University of the District of Columbia.

Her excellence in teaching was honored by the 1994 Harvey Levin Teaching Award from the graduating class at the University of Pennsylvania Law School and the 2002 Sacks-Freund Award for Teaching Excellence from Harvard Law School.

Guinier was recently on the Tavis Smiley show talking about affirmative action and the U.S. Supreme Court’s decision to revisit that issue. http://www.pbs.org/wnet/tavissmiley/interviews/harvard-law-professor-lani-guinier/

The annual G. Theodore Mitau Endowed Lecture honors the Minnesota scholar, educator and Macalester graduate and professor who emigrated to the U.S. from Nazi Germany in the 1930s.

Maccolades for May 2021: painting for Pride, food security fellowship, and remembering 100 years of subversion

Sounds of Blackness to perform at 2021 Billboard Music Awards

The Grammy-award winning group, which was formed at Macalester 50 years ago this year, will appear remotely from Prince’s Paisley Park.

Dr. Lisa Anderson-Levy will become the college’s Executive Vice President and Provost. She will begin her new role on July 6.