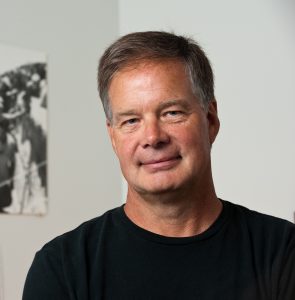 St. Paul, Minn. – J. Andrew Overman, the Harry M. Drake Distinguished Professor in the Humanities and Fine Arts in Classics, has been awarded the 2012 Thomas Jefferson Award. The award was established in 1961 by the Robert Earll McConnell Foundation to honor faculty members who exemplify the principles and ideals of Thomas Jefferson. Overman was selected by a committee of past Jefferson Award winners.

J. Andrew Overman, Harry M. Drake Distinguished Professor in the Humanities and Fine Arts, for the past 20 years the Macalester community has benefitted from your teaching, leadership, and ever-smiling presence both on and away from campus.  You are author and co-author of 4 books and numerous scholarly contributions. Your interest incorporates the religions and cultures of the Roman world, with a focus upon Christianity and Judaism.  Your teaching range includes such courses as “India and Rome,” “Pagans, Christians, and Jews: Cultures in Conflict,” Archaeology, and Greek.  Your insights into the cultural diversity and conflicts of the Roman Empire help us to understand the diversity of cultures and the seeming irresolvable conflicts of our time.  The depth of your insights on the relationship between empire and religion in the Hellenistic Period sheds light on church-state relations today and the current political situation in the Middle East.  The parallels you draw between the issues of identity and multiculturalism in Classical Antiquity and the same issues in our world are a continuing source of insight for all of us.  You deal with issues that are of vital concern to pluralistic democracies, and have even taught a topics course on democracy.  In your hands, the study of classics encompasses much of the humanities, social sciences, and fine arts past and present.

Your leadership in the Classics Department has revitalized student interest in the classical Mediterranean world.  The inclusion of Archeology has in fact made the field of Classics a seductive curricular option.  Your dig at the Omrit Archeological Excavation of a Roman temple in Israel has hosted numerous students as well as faculty, staff and alumni. As the Israel Antiquities website states, “The identities of the site and the temple are still shrouded in mystery, … because until now no inscription has been uncovered.” The Israeli Antiquities authority considers this an outstanding find. The excavations at Horbat Omrit, which you began in 1999, make real the connections between the classical past and the present day.   It is through your work and teaching that students’ worldviews are changed. However, it is not all work when one visits the site; students also learn by touring the major historical and cultural sites of Israel, eating shwarmas in Kiryat Shmona, ordering in pizza from “Katyusha Corner” and having a cold Goldstar beer at the Kfar Szold kibbutz where they stay.

Your work at Omrit was immortalized in the half hour documentary “Digging in the Dirt” by world famous (or at least Twin Cities famous) Jason Davis from KSTP’s “On the Road Show.”

Friend of the Fine Arts, you have recently lent your leadership skills to the Fine Arts faculty and staff as they and the college successfully moved forward with a long-planned renovation program.  In fact, your tenure at Macalester began when the Fine Arts faculty had their initial 1993 meetings regarding the often de-railed plans for the Janet Wallace Fine Arts Center.  You drew them together, got them talking, and kept them on topic.  Your “smoothness” and sincerity greased their wheels and no doubt those of many who have made the initial renovation phase an imminent success.  Who can say no to your smile?

Andy, your reach into the community beyond the confines of the college is to be lauded.  Prior to finishing graduate school you worked ten years as a Congregational minister.  Presently you serve on the Board of Directors for “Ready for K,” an organization dedicated to preparing Minnesota’s youngest citizens for kindergarten.  Many of you may not know that Andy has an athletic background.  At St. Johns in Minnesota you were the quintessential scholar-athlete receiving a MIAC all-conference award in hockey! Whereas most of us have been content to leave our high school and college athletic activities behind us, you have refused to do so.  Instead, you have continued your passion for hockey.  Even at your age, you play with passion and determination, as evidenced by your recent broken ankle!