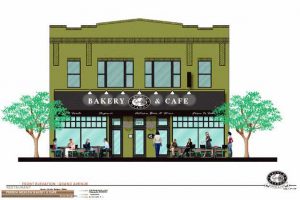 St. Paul, Minn. — French Meadow Bakery & Café is coming to St. Paul.  The bakery and café will open at 1662-66 Grand Ave., former home to Coat of Many Colors and Coffee News Cafe.

French Meadow on Grand will occupy the entire first floor of the building that is owned by Macalester College. In January the company will begin renovations and is expected to open in May 2013. Architects rendering is attached,

“French Meadow will be a great addition to Grand Avenue and the Macalester neighborhood,” said Macalester President Brian Rosenberg.  “It will fit nicely in to the eclectic mix of businesses around the college.”

French Meadow Bakery & Café, which began in 1985 as an organic and yeast-free wholesale bread bakery largely serving the local Twin Cities co-ops, is the oldest continuously certified organic bakery in the United States. It has become an award-winning Twin Cities institution that pioneered the movement to promote slow food and locally grown ingredients as the core of its menu and philosophy.

“Over the years our St. Paul customers have urged us to ‘come across the river,’” said Lynn Gordon, owner and founder of French Meadow. “This location holds a special significance for me since I spent my teenage years just a couple of doors down from the new Café on Grand, studying ballet. I look forward to returning to the neighborhood.”

French Meadow on Grand will feature all the French Meadow favorites and a wine and beer bar with an eclectic selection of organic and biodynamic wines, local craft beers on tap and a large outdoor patio.