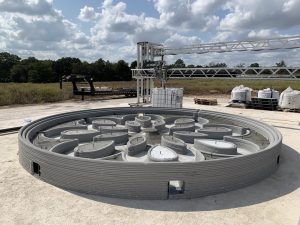 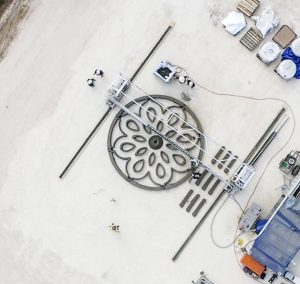 Not long after she declared her major at Mac, Kayla Schang ’21 (Appleton, Wisc.), a physics major with an emphasis in astronomy, got an email from the Physics Department. It listed upcoming opportunities for students, including programs at the NASA L’SPACE Academies.

The online interactive programs are open to undergraduate STEM students who are interested in pursuing careers with NASA or other space organizations.

“I had taken Modern Astronomy with [physics professor] John Cannon, and I thought the space-related stuff of physics was very cool,” says Schang. She applied and was selected for the 10-week L’SPACE Mission Concept Academy. In spring 2019, she and a small group of other student interns worked on a problem selected for them by NASA: design a lander that would land on Mars and look for subsurface ice.

That summer, Schang was selected for a second academy, the NASA Proposal Writing and Evaluation Experience Academy (NPWEE). This time, she and her teammates could choose the problem they wished to work on.

Their project, the Lunar Plume Alleviation Device (PAD), “aims to mitigate plume impingement and abrasive regolith debris and protect the crew, lander, and surroundings,” according to a recent paper co-authored by Schang and teammates in Aerospace Research Central (4 Jan. 2021). The model is designed to be 3D printed. The team writes that these types of technologies are needed to “enable more safe and repeated landings and launches on planetary bodies.”

Since then, work on the Lunar PAD has continued. We caught up with Kayla to learn more.

What is the Lunar PAD project?

The project is meant to work on the moon, but it could be modified to work on Mars or any other place that you land. When you are landing on the moon, there are these huge dust plumes that cause a lot of different issues. To explain it simply, there is a lot of charge, and that keeps everything hanging in the air for a long time. If you are in the way of the plume, you basically just get sandblasted. NASA had identified landing technologies as something that could be improved on, so that is where the landing pad component comes in.

How did the team develop this project?

NASA uses something called a quad chart. It’s a one-page summary of a concept where you list what’s unique about the design, maybe with a little sketch of what it might look like. After creating quad charts for several ideas, we got advice on which project seemed the most feasible to keep working with, and then we selected the landing pad concept from there.

The model has definitely changed a lot since we started. Many of the early steps were research on what technologies exist. How can you combine them in a new way? We went through iterations of the design, doing more research and talking with subject-matter experts in between.

We won the Proposal Academy and won some money to keep working on the project. That sparked the idea of going further and making a Design Readiness Review (DRR) . We presented to NASA Marshall Space Flight Center and won more funding to actually make this prototype. Everything got delayed a little with COVID, but now we’re in the current phase of completing the prototype and testing

What does the Lunar PAD look like and what is it made of?

Normally a landing pad is a flat or solid surface. Our design instead has empty space in the middle of it. The landing pad has some height to it, with openings in the surface so that when the lander is landing, the exhaust can be directed outwards, away from the pad. The idea is to have fan blades—we call them kinetic energy diffusers—that would collide with the exhaust and dust and spin them around, so they lose energy.

The conceptual design would be printed with a lunar regolith-based concrete. Regolith is like dirt…and there are a lot of different ideas about how you could turn that into concrete. Right now, we are printing the prototype with an Earth-based concrete developed by the company doing the printing for us.

What’s next for the project?

We did a hot fire test in early March. We set up the rocket motor and let it burn about a foot off the pad. We measured temperatures and pressures to map out where all of the dust in the plume and exhaust went while that was happening. There are two parts to it: First, how does the pad survive? Over the next few months we will be looking into the details of that. Second, how did the flow work? Were there any obstructions? These things will help refine the design. In the coming months we will continue to do more tests including an extreme temperature test and testing the properties of materials like regolith. The long-term goal of this project is to use the knowledge gained about the design and construction process towards a full-scale design to be used on the Moon, Mars, and more.

What’s next for you?

After I graduate this spring, I plan to attend graduate school in planetary science. I’m interested in small bodies like asteroids, or where there is water in the solar system. I tend to like places with more terrestrial surfaces versus studying the atmosphere. I’m in the process of figuring out where I might do that next year.

Connecting Ukrainians to US Employers

Two students aim to connect refugees to work in the United States.

Learning on the job

Three students intern with the Advocates for Human Rights

Last fall, in both hybrid and remote positions, Macalester students interned at companies, nonprofits, and startups across the Twin Cities and beyond.

Through an internship grant program at Macalester, students were able to explore career interests at a number of places, in the Twin Cities and around the world.