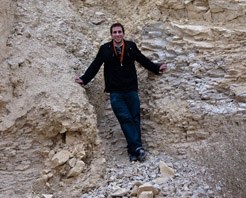 Since graduation in 2010, Joseph Glatman-Zaretsky has worked in business, but he relies on his classics foundation daily. From September 2010 to February 2012, Joe worked as a global sourcing analyst at Target headquarters. His job entailed two main responsibilities: communications and sales analysis. He worked with vendors and factories overseas (mainly China, Thailand, and India) to resolve production issues, shipping, and quality assurance, as well as with merchant planning team in his departments, following sales trends to better inform the vendors what future products would be and how much they would produce for Target.

In February 2012, Joe moved to Washington, D.C., to work for The Advisory Board Company, a consulting firm for hospital and university management. He works with the strategy and operations team, which analyzes the rate at which the consultants convert potential clients into business partners. Based on forecasted goals, his team provides analytical suggestions to consultants to meet those goals if they are not on track.

Joe says that the global focus of his classics coursework at Macalester developed an international perspective that helped him with his position at Target. Working abroad in Greece for a summer helped him understand how to communicate with coworkers from other cultures. At Target, he worked extensively with employees working in various Asian countries. In his current job, he leans heavily on the analytical skills he cultivated in his classics major. “When translating Latin, the key was to always find the subtle meaning in what we were reading,” Joe says. “Now, I do something similar, just with numbers. I take large data sets and break them down to find where our company still has opportunity for growth.”