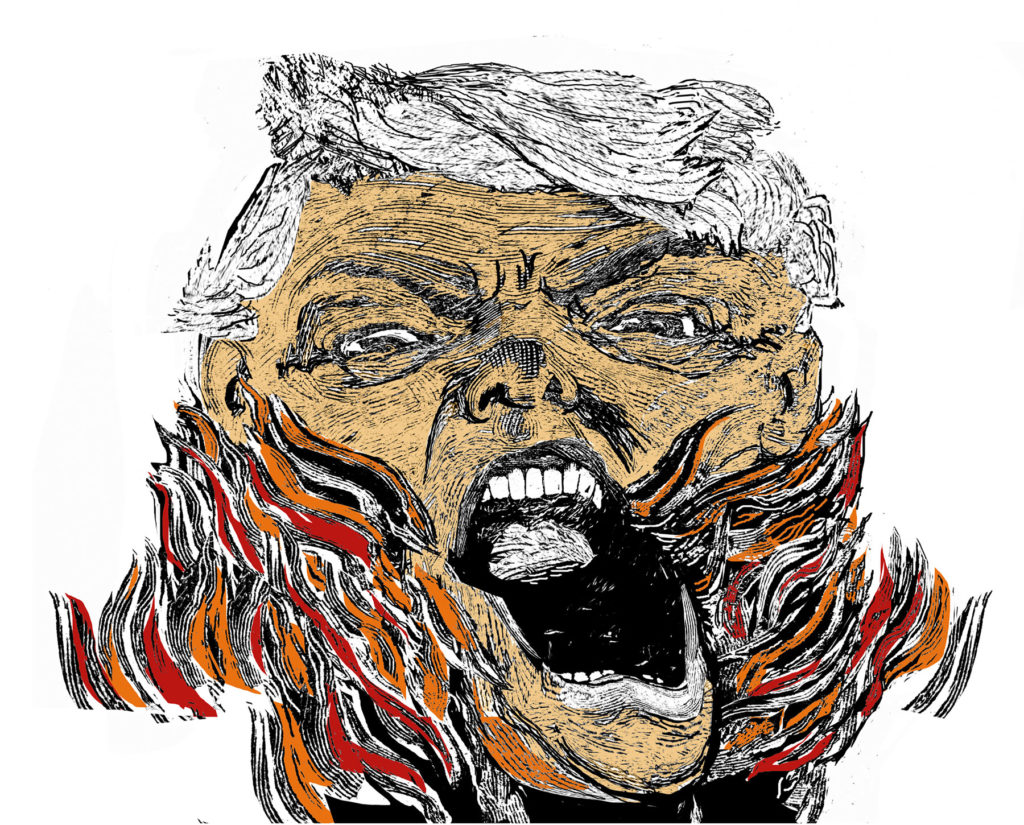 The Political Print
Ruthann Godollei and fellow artists Aaron Ortiz-Johnson (“EXILE & UTOPIA”) and Sam Gould (Beyond Repair and Transmission), reflect on the power of print as a disseminator of artists ideas and everyday politics.
Thursday, March 1
7–9 pm

The Hellmouth is a medieval motif depicting the damned and the unrepentant swallowed by the gaping jaws of a demonic beast. “The Hellmouth reminds you to wake up and smell the sulfur,” says artist Ruthann Godollei.

“This is the worst political landscape I have ever seen.” Ruthann Godollei is in dismay. “It is not just one errant leader, or a set of craven elected office-holders, it is a corrosive cultural climate raining fire, gleeful at causing others pain.”

Drawing on the bluster and bombast of antique circus imagery the artist researched at Circus World Museum in Baraboo Wisconsin, Godollei’s work drags up the twisted and pathetic underbelly of the current presidential administration’s “big show.”

America is overwhelmed by the circuses and media spectacles. Each news outlet constantly churning to report on the outrage of the moment, leaving everyone numb and too shell-shocked to get their feet out of the political dumpster fire. Likewise, huckster impresarios of the 19th century drew massive crowds whom they fooled with promises of wondrous spectacles promising “the greatest.” Godollei recognizes that it’s these types of old-timey hokey barkers who have surged back in power, spreading their lies and bigoted ignorance about immigrants, women, people of color, the LGBTQ community, the poor, the environment, the unions and the underrepresented.

Ruthann Godollei thinks words matter. Not only does public speech normalize certain outlandish modes of thought, but words become fashionable currency, searchable, tradable, data-mined, and act as shorthand for insidious ideas with darker, broader, and more stubborn roots. The words these political animals use don’t translate to what they mean in English. They are codes for “bring back the good old boys,” for “we can’t stand losing,” for “money is everything,” and for pathetic egos, privilege, power, and soulless greed. They feed on nostalgic references to an idealized time that never existed, and they seek to dismantle the gains of civil rights and justice movements.

Godollei thinks the words need to be reframed in the absurd context they deserve and puts her money where her mouth is by creating a freak show of her own, complete with a circus wagon – hell on wheels – spewing brimstone and B.S. The “political animals” are reduced to children’s pull toys, a cheap version of a cheap circus, only barely three-dimensional, scuffed paper on splintered wood, making wonky and pained noises as they limp along. They, like the boys in power, come from an era before our time, they symbolize the return of the repressed, and are able to do lasting damage under the guise of childish, storybook-logic. Godollei doesn’t have a Band-Aid for the acid burns. She only suggests that we stop being so stingy; with our taxes, with our time, with our human empathy, with our love, with our concern for others.