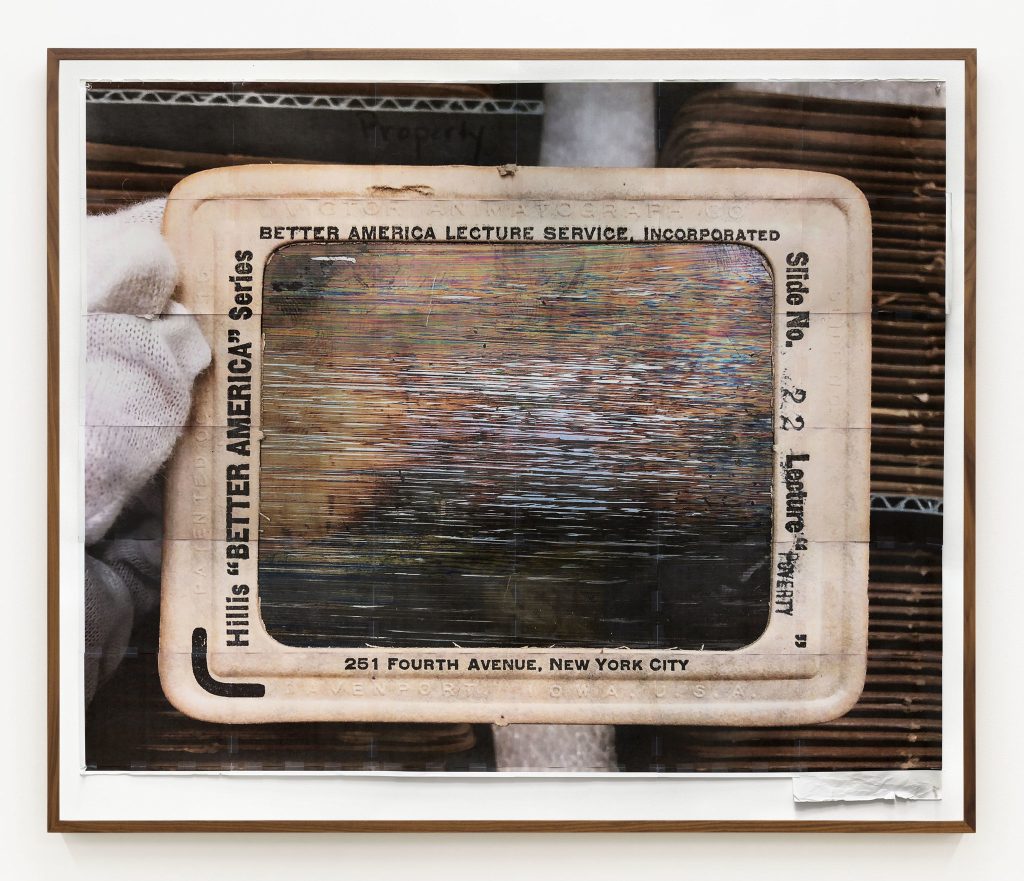 Stephanie Syjuco pushes our already complex relationship with images, creating analog displays that move between physical and digital archives. In the process she prints, reprints, and rephotographs her subjects, in an attempt to form new narratives of resistance. In Blow-Ups, Reprints, and Reversals, the artist’s first solo show in the Twin Cities, Syjuco makes apparent the violence coded in the many double entendres within the language of photography.

The exhibition focuses on recent bodies of work that the artist produced following archival research at national museums and online archives. Central to the gallery, is Partial Anarchival Index (Working Platform), 2022, a tableaux consisting of six built platforms on which over 50 enlarged paper prints are draped. Culled primarily from the Smithsonian National Museum of American History and the Smithsonian National Museum of Natural History, these collective images serve as decolonizing interventions in the archives of American empire, and point to the constructed and imperfect nature of archival systems. The installation is flanked by enlarged, framed prints that hone in on select historic objects that are reprinted and rephotographed multiple times in an effort to deny their legibility and challenge their claims of  their accuracy. The imagery includes documentation and business papers  of the Ku Klux Klan, mass-produced teaching tools on American history, and crumbling colonial-era photographs, each aptly titled with the specific museum collection number.

The back of the gallery is devoted to a screening room for Block Out the Sun, a video created to highlight the omissions and biases of archives and “talk back” to this power while caring for its most vulnerable. While on residency in St. Louis, Syjuco researched images in the local archives, libraries, and historical societies, searching for photographic documentation of a faux Filipino village created for the 1904 World’s Fair, in which over 1000 people were put on display in a type of “human zoo.” Of this project, Syjuco states, “By physically blocking the images with my hands, I attempted a direct way of intervening in an archive, thwarting the viewer’s ability to fully consume the people and faces on display. Over a century after the original photos of the Filipino Village were taken, my own body, sitting in the archives, becomes both a temporary shield and a marker of defiance, while at the same time acknowledging that the images still remain.”

Placed on adjacent walls ‘watching’ the film are five Headshots (Witnesses), pixelated and enlarged portraits of men, women, and a child. Originally photographed at the 1904 St. Louis World’s Fair in the “Philippine Village” exhibit, then printed in a tourist pamphlet in the archives of the St. Louis Mercantile Library at the University of St. Louis, the images have been mediated through differing forms of photographic reproduction that spans more than a century: from initial gelatin silver photographs, to mass-produced printed halftone, to digital image, to dramatically enlarged archival pigment print. Now enlarged, they are reminiscent of contemporary surveillance photos. “Hung at head height, the ‘portraits’ act as witnesses, looking back at the viewer with a revived agency.”

Stephanie Syjuco works in photography, sculpture, and installation, moving from handmade and craft-inspired mediums to digital editing and archive excavations. Her projects leverage open-source systems, shareware logic, and flows of capital, in order to investigate issues of economies and empire. Recently, she has focused on how photography and image-based processes are implicated in the construction of racialized, exclusionary narratives of American history and citizenship. She is the recipient of numerous awards, including a 2014 Guggenheim Fellowship Award, a 2020 Tiffany Foundation Award, and a 2009 Joan Mitchell Painters and Sculptors Award. She was a Smithsonian Artist Research Fellow at the National Museum of American History in Washington DC in 2019-20 and is featured in the acclaimed PBS documentary series Art21: Art in the Twenty-First Century.

Born in the Philippines in 1974, Syjuco received her MFA from Stanford University and BFA from the San Francisco Art Institute. Her work has been exhibited widely, including at The Museum of Modern Art in New York, the Whitney Museum of American Art, The San Francisco Museum of Modern Art, The Smithsonian American Art Museum, The Walker Art Center, The 12th Havana Bienal, and The 2015 Asian Art Biennial (Taiwan), among others. A long-time educator, she is an Associate Professor in Sculpture at the University of California, Berkeley. She lives in Oakland, California.

The Law Warschaw Gallery would like to thank RYAN LEE Gallery and Catharine Clark Gallery for their collaboration and support of this exhibition.