An evening to celebrate the Iyapo Repository and meet the artists.

Asega and Okunseinde join Twin Cities academics, artists, and officials, to discuss the self-determining and collective actions necessary for building future histories and shaping your own city.

The Law Warschaw Gallery at Macalester College is pleased to present Iyapo Repository, a collection of digital and physical artifacts created to affirm and project the future of people of African descent, by New York artists Salome Asega and Ayodamola Tanimowo Okunseinde.

Named after Lilith Iyapo, the protagonist from African-American novelist Octavia Butler’s Xenogenisis series, the Iyapo Repository was founded in response to a lack of representation of people of African descent in projections of the future. Rather than taking on the escapist view of traditional futurism, the Repository operates within a legacy of self-determined societies and functions to center black communities as owners of their own futures, correcting historical seizures of black authorship, cultural appropriation, denial, and erasure.

Through the Iyapo Repository, the artists host workshops where participants from various diasporic regions have contributed to the future of these communities as “archivists of a museum of the future,” envisioning new artifacts of technological importance which the artists, in turn, interpret and generate. Collectively, the objects speak to individual and group expressions of the future by identifying current cultural, environmental, social, and political issues and imagining a way to move them forward.

The artists and project take inspiration from other contemporary artists who create future-forward work like Fabrice Montiero‘s high-fashion photographs of pollutants, Kelvin Doe (DJ Focus) a Sierra Leone-based artist and engineer, filmmakers Wanuri Kahiu and Hype Williams, and the now-retro ‘future’ electronic aesthetics of Detroit’s ‘The New Dance Show.’ The artists also draw influence from artists and activists, like Amandla Stenberg, who speak out against cultural appropriation using the web and social media, and teens of color that use social media to invent language, like Peaches Monroe — the advent of language is also an act of futuring.

Artifacts in the collection include a suit designed to give a calming sensation using wave data to therapeutically treat water-related traumas rooted from the trans-Atlantic slave trade; ‘Afromation’ pills which prescribe black history lessons on civil rights and Rock and Roll; and a portable device which alerts its wearer of the geolocations of nearby extra-judicial killings.

At the Law Warschaw Gallery, the artists will exhibit a selection of artifacts, films, manuscripts, and rare books from the Repository’s collection, as well as host a series of workshops for Minnesotans of African descent to produce manuscripts which the artists will interpret into new objects to add to the collection.

ABOUT THE IYAPO REPOSITORY

Iyapo Repository was originally developed by Salome Asega and Ayodamola Okunseinde as part of their Eyebeam project residency.

Salome Asega is a Brooklyn-based artist and researcher whose practice celebrates dissensus and multivocality. She is the co-host of speculative talk show “Hyperopia: 20/30 Vision” on bel-air radio and the Assistant Director of POWRPLNT, a digital art collaboratory. Salome has participated in residencies and fellowships at Eyebeam, New Museum, and The Laundromat Project, and she has given presentations at New Inc, Performa, Eyeo, and the Schomburg Center. She received her MFA from Parsons at The New School in Design and Technology. 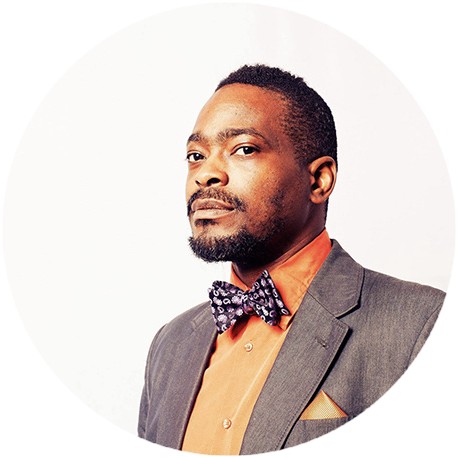 Ayodamola Tanimowo Okunseinde is an artist and interactive designer living and working in New York. Okunseinde was the co-founder and creative director of Dissident Display Studios, an award winning studio and art gallery based in Washington DC. As a collaborator with, amongst others, choreographer Maida Withers, Carmen Wong, and Yoko K., He has created several interactive performance based works and has performed in several countries including Mexico, Finland, and Croatia. His art residency participation includes Finland’s Invitation to Helsinki, IDEO’s Fortnight, The Laundromat Project, and Eyebeam. His works range from concepts in Afrofuturism to physical computing, and painting. Okunseinde holds an MFA in Design and Technology from The New School, Parsons School of Design in New York where he is currently an adjunct faculty member.