German Studies graduates from Macalester pursue a variety of careers in fields as wide-ranging as law, government, international relations, business, medicine, translation, teaching, journalism, and film-making. Since 1971, over 60 graduating seniors have received the prestigious Fulbright-Hayes fellowship for a year of study a German university. Numerous other German Studies graduates have received teaching assistantships in Germany or Austria from Fulbright or the German Academic Exchange Service for the year following graduation. 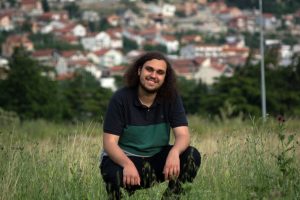 I started my adventures with the German language in my first semester at Macalester thinking that I would only take a few classes. However, little did I know that I will end up with a major and an honors thesis in just a couple of years! During my last semester at Macalester, I started a remote internship with the German Center for Research and Innovation in New York (DWIH NY), which continued through my post-grad summer. In this internship, I was able to combine my love for the sciences with the communication skills in German that I acquired through my German Studies major at Macalester. In the fall of 2021, I was fortunate enough to return to my high school at UWC Mostar as a Biology
teacher. This wouldn’t have been possible without the fantastic opportunity to be an Elementary German Lab Instructor in my senior year. Now, I am starting an MSc program focusing on Molecular and Computational Biology at Karolinska Institutet in Stockholm. One could say that I am taking a little detour from German, but it is actually very useful for learning Swedish! Even though I won’t be pursuing German Studies academically, for the time being, completing the major was one of the best and most fruitful life decisions. The major helped me develop a way of thinking and learning that I was able to apply across disciplines and the study abroad program really gave me the flexibility to explore my academic interests in both humanities and sciences.

After graduating from Macalester with a double major in German Studies and Russian Studies in 2003, I taught for a year in Austria as a Fulbright Teaching Assistant, and after a few detours, completed my Master’s degree in Germanics at the University of Washington. I never forgot how formative my experience with study abroad on Macalester’s program to Tübingen and Vienna was, and so I wanted to find a way to pass that opportunity on to others. I’ve been working at the CIEE Berlin study abroad institute since 2015 in a variety of roles – from language instructor to program assistant and most recently now as Student Life Manager since 2018. It has been so gratifying to work with hundreds of students over the past years – whether it is cultural programming, fostering connections with local community, supporting their cultural adjustment and wellbeing, or just day-to-day advising and conversations – and to pass along the spirit of intellectual curiosity and intercultural growth that Macalester helped instill in me. 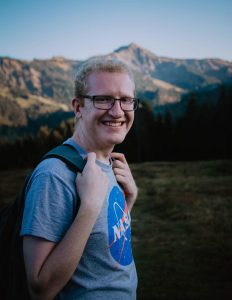 I started out in the German department because I wanted a place to speak German, but it’s so much more than that. The department exposed me to new literature and films and gave me a perspective on art and history that I had never had before. My courses in the German department were without doubt the most academically stimulating and intellectually challenging classes I took while at Mac, and I credit them all for making my education at Mac truly rounded and impactful. My understanding of language as a medium, and my abilities to read, write, and think critically were all refined by my time there. The professors are all engaged and engaging; they supported me both academically and personally and enriched my time at Mac and my life post-Mac enormously. I’ll be going in to my second year as an English teaching assistant with the Austrian Ministry for Education in the fall, a position I love, and which I first learned about from the German department. Apart from allowing me to live in Austria—a dream of mine in itself—it lets me similarly help students through a similar exposure as they learn English. 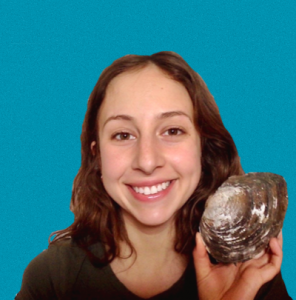 I graduated from Macalester in 2019 after studying biology and German studies. Following my graduation, I received a Fulbright grant to conduct freshwater mussel research in a leading aquatic ecology lab at the Technical University of Munich. Working in a foreign lab environment has given me access to unique perspectives, which have aided not only in the development of my own research, but also in my ability to develop informed, integrative positions on current topics in aquatic ecology. Studying German at Macalester not only prepared me to speak a foreign language on a daily basis, but it also challenged me to comprehend perspectives other than my own, and to solve problems with creativity. When my career goals felt out of reach, the department faculty helped me explore opportunities that allowed me to pursue both my biology and German interests. They provided career advice, conducted mock interviews, and connected me with a network of supportive alumni. In doing so, they showed me that pursuing my multidisciplinary interests was not only possible, but also extremely valuable, and could lead to life changing experiences. Studying German at Mac enriched my college experience, established a lifelong community of mentors and peers, and set me up for a career in the international scientific community. 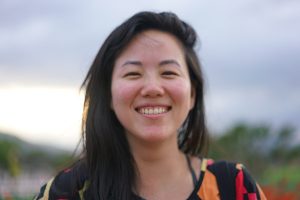 I cherish the lessons from the professors because Germany is at key intersections of so much of modern history, politics, science, the arts, etc, that what I learned about Germany was and is practically relevant to a Korean citizen like me.

I moved homes frequently; so naturally, I think about what that means to me. When I think of home, one of the images that come to mind is the German Department office on the second floor of Humanities at Macalester, with the professors’ mailboxes and coffee pot at the entrance…. After Macalester, I worked as a TOEFL teacher in Seoul, a teacher in an “agriculture abroad” school in the Sobaek mountains, and since 2015 I have started my journalism career at NPR and am now making short documentaries for InterV, a startup in Seoul.

As a journalist, when I cover stories about Korean unification, I refer back to what I learned about Germany’s complex relationship with memory. As a filmmaker, when I shoot and edit, some unconscious and conscious habits come from films and critical theories I fell in love with in class. Beyond the patchwork of knowledge here and there, what I cherish most are the professors’ sensitivity to others and joy in what they taught. I try to remember that, while listening to the stories of others and trying to recreate things of good value, with joy. 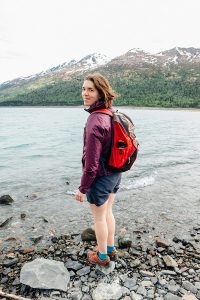 After graduating from Macalester, I traded the flatlands of Minnesota for the mountains of Alaska. I am currently working at the Alaska Native Tribal Health Consortium with the Center for Environmentally Threatened Communities program. We support rural Alaska Native communities access resources to adapt to climate change. Although I don’t speak or use German on a daily basis, the critical thinking and analytical skills I learned in the German Studies program benefit me every day. Studying German was a highlight of my time at Macalester and the department came to feel like a second home. My time as a German major has instilled a lifelong appreciation for the literature, art, and history of the German-speaking world.

Iris Micklavzina ’15, law clerk at the Superior Court of the District of Columbia 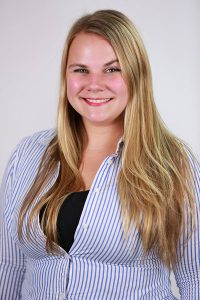 I graduated from Mac in 2015 with a double major in German Studies and Anthropology and a minor in Music.  I went on to complete law school at the University of Michigan, and am now barred as an attorney in Maryland and the District of Columbia.  I am currently working as a law clerk to the Honorable Steven M. Wellner on the Superior Court of the District of Columbia. While I (regrettably) don’t have the opportunity to use German every day in my professional career, the skills I gained and experiences I had as a German major have helped me get where I am today and remain applicable in my everyday life.  First, learning a language as complex as German taught me a lot about linguistic structure and my writing skills improved dramatically as I learned to master academic writing in both German and English.  Learning the intricacies of the German language requires great attention to detail and precision, as does the study and practice of law.  My research skills also improved as I learned to navigate both English and German academia, history, philosophy, music, literature, theater, and so much more.  Second, my experiences on the study abroad program taught me independence and responsibility as I navigated foreign culture, bureaucracy, education, and academic systems.  I was able to take courses in German at the University of Vienna which applied as credits toward both my German major and my Anthropology major, and I relied on my experience navigating a challenging and foreign academic system to succeed in law school.  Finally, as a German Studies major I didn’t just learn a language, I learned a whole new perspective on the world, from governmental systems to art and literature, from philosophy to cultural mores.  My experience in the German department made my education at Macalester truly international and multicultural, and taught me the academic tools, interpersonal skills, and self-reliance to succeed in law school and in my career as a lawyer. 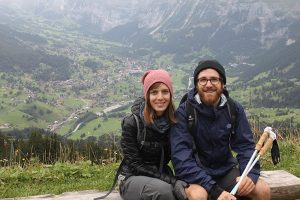 Before graduating from Mac in 2011, neither of us knew exactly what our “next steps” would be, but highly doubt we anticipated that we’d now be living together in Germany, completely “eingedeutscht” (German-ified? Germanized?). We were both lucky enough to participate in the Congress Bundestag Youth Exchange program in the year following graduation. While we both had vastly different experiences in different cities during that year abroad, it left us wanting more. Two years later, in 2014, we found ourselves back in Germany, this time in Freiburg im Breisgau, a mid-sized town in the southwest of Germany.

At this time, I (Carl) began studying for a master’s degree in Environmental Science (Umweltwissenschaften) at the University of Freiburg. It seemed like a logical way to continue pursuing my passion for both German and Ecology. After completing my program in spring 2017, I stayed at the University as a researcher and lecturer for two years until I was able to secure funding to start working on my PhD. For me, I think the most important thing I learned as a German Studies major at Mac was the cultural competency component that was built into all of the courses and especially the study abroad experience. Understanding cultural references, local history, the political system and social norms has helped me feel comfortable and at home in an otherwise foreign country. 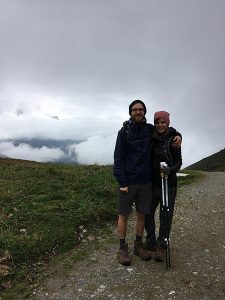 I (Kate), joining Carl, although with no set work plans in Freiburg, began looking for work in Freiburg. After about six months working at a charming cafe (oh gosh and a gig at the Christmas Market, as well as a brief stint as an English teacher!), I was fortunate to land a job at the Haufe Akademie, the largest provider of adult professional development (Erwachsenenweiterbildung) in Germany and have been there since in various roles and projects. For me, the most valuable skill I’ve gained through my experience at Macalester, especially through language study and experiences abroad, would have to be how I view and deal with new and challenging situations. Living and working abroad, regardless of how integrated one is, there’s an ounce of challenge to each day and an experience different to that of a native. I’ve learned to enjoy and crave this kind of challenge!