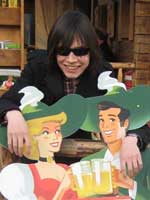 Because the German Studies major is interdisciplinary, with elements of cultural, literary, and film studies featured prominently, my two majors have worked quite well with one another. Having a strong background in literary criticism helped me when I began writing papers in German. Similarly, many of the works I have read for German have found their way into my English papers. Aspects of Goethe’s Faust as well as the Caspar David Friedrich’s painting Wanderer above a Sea of Fog have found their way into my honors project for English. My background in German has also been helpful when the nineteenth century Anglo-American novels that have been my focus for English reference German words. The Macalester German Study Abroad program was also incredibly convenient, as I was able to take an English seminar course on 18th Century British Literature at the University of Vienna. Despite starting it sophomore year, I stayed on track to complete my English major while in Austria. 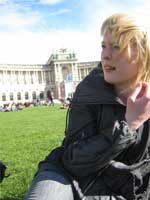 I decided to major in German Studies after deciding on my first major, Media, and Cultural Studies. Much of the theory that structures MCS has its roots in German culture and history, and knowing the language has helped me to better understand the context of many of of the ideas I read about in these classes. Also, because my Media Studies focus in MCS has given me a new way of viewing cultural texts, I am able to better understand many of the media I encounter in my German Studies courses. It’s also been relatively easy for me to blend the two majors; because German and MCS have at least one cross-listed course per semester and MCS allows classes from the Philosophy department, which sometimes is crosslisted with German Studies, and classes based on intellectual history, such as Romanticism (GERM 363) to count toward the major, I have had no problem accumulating enough credits to complete each major. 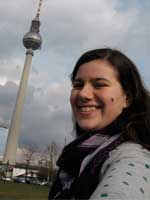 I came to Mac intending to major in English and Educational Studies. I took German to finish the language requirement, but quickly realized I was well on my way to a major, just based on all the classes I wanted to take. My three majors have fit together in surprising ways, especially because the German major covers such a range of topics. It was particularly interesting to take a class in Romantic literature in both the English and German departments. I was able to make connections beyond the usual limited scope of just the English and American branches of the literary movement to include the earlier German origins. I’ve also been fascinated by learning about the German education system, and I’ve often brought up the differences as a point of comparison in my educational studies classes. During study abroad I was able to apply all three of my interests: taking advantage of the University of Vienna to take a course in literature, and complete an internship with an English class at a local Gymnasium school. After graduation I hope to continue to pursue the intersection between German, English, and education with an internship as an English teaching assistant in Austria. 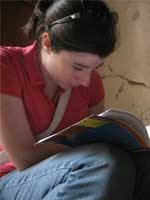 My German and Theatre double major has turned out better than I could have ever imagined. Not only have they not gotten in the way of each other, they complement each other quite nicely. There’s obviously quite a bit of overlap between the two fields, what with all the famous German playwrights and dramatists (Bertolt Brecht is my homeboy), and I’ve enjoyed being the go-to German/Theatre expert in my respective classes. Study abroad was undoubtedly the crowning achievement of the collaboration between my majors, not only because Berlin and Vienna have great theatre scenes for me to enjoy, but also because one of the required classes is centered around reading, seeing, analyzing and enjoying German-speaking, specifically Viennese theatre. I also regularly attended a lecture at the University of Vienna about the Austrian national theater, and there were a number of exciting theatre courses to choose from. It got to the point where I almost pitied the other German students who weren’t also majoring in theatre, because they weren’t getting the full experience or benefit of study abroad. Ultimately, the German department was very accommodating of my second major, and as a result, I may eventually be led down a career path that combines both. German theaters, here I come! 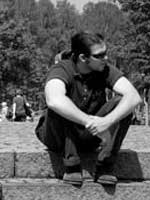 A German studies major and a Philosophy major are the perfect combination; they go together like peanut butter and jelly. Having the influence of thinking and writing in German has not only helped me understand the English language better, but it has also kept me from getting lost in translation, since I can read German texts in their native language, giving me great advantages and interesting insights as a philosophy student. With a background in both fields I have read a plethora of influential German intellectuals from Fichte, Schlegel, Herder, Hegel, Kant, Schopenhauer, Leibniz, and Nietzsche to more contemporary academics such as Heidegger, Jaspers, Habermas and Ratzinger. Yeah, even the Pope! In addition, my double major gave me the courage to study philosophy at the enormous University of Vienna, which has over 60,000 students. Through the process of working on my double major, new doors have been opened, even outside the academic setting–I currently intern at a non-profit organization in St. Paul called the Germanic-American Institute that specializes in cultural outreach. Together, a German studies major and a Philosophy major have encouraged a deeper understanding of my own language and my own culture all while learning useful real-world skills.